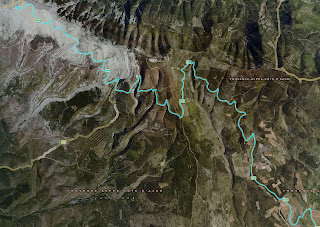 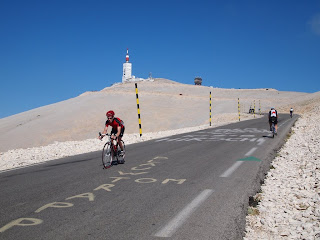 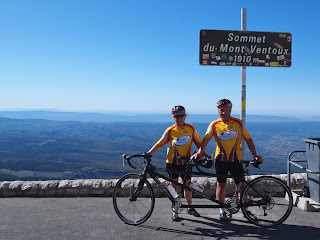 Maggie and I have had a very good week in Provence on a CTC holiday led by Chris Ellison. A number of people have spoken well of it, and we can certainly endorse their recommendation. The holiday is based at Buis les Baronnies which is in the middle of some very good cycling country - quiet roads, good climbs and good company.
Climbing Mont Ventoux was undoubtedly the highlight of the week - despite its fearsome reputation it's actually not too bad if you take it steadily, though the wind at the top really was something. One of the few places where the weight of a tandem is an advantage. 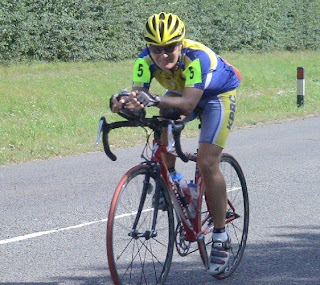 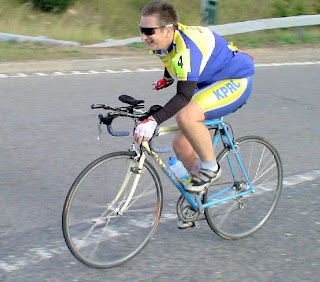 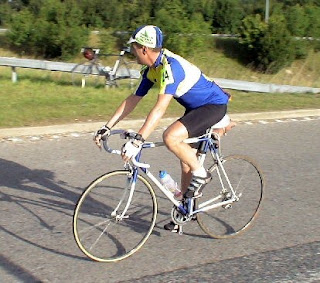 For the first time in the 5 years I have been riding this event we had no rain whatsoever in the 12 hours. In fact we had brilliant sunshine the whole time and a very warm, dry Southerly wind (great for the long barrow that Frank was timing but horrible for us). Various folks out on the day have reported that their cars showed the temp as 28 or 29 degrees.

Despite all that, we managed:

Mike Levett (Lewes Wanderers) who has been riding the evening 10s did 206.


Frank reports that the Tandem Trike did 272 for 12 hours beating their own record by approx 10 miles, and were still on course late last night to beat the London Edinburgh record (though don't know yet if they managed it) they weren't expected to continue for the 24.

Thanks to Ron, Doreen & Rosemary - chiefly helping Brian - and Simon & Jen helping Jake, for the assistance (especially sponges) to all three of us. And of course thanks to Pete for helping me, I couldn't have done it without him (even if it did take only 4hrs 20mins for me to start swearing at him - I was hungry and hadn't seen him for over an hour!!!)

Finally the report on the Long Barrow is successful attempts at 12hrs (270ish) and London-Edinburgh (19hrs 15 - approx 2 hours off old record) and the 24 abandoned. At 8am this morning Frank was in a bed somewhere......!
Posted by Lisa at 06:16 No comments:

Ralph Dadswell and Paul Mace are attempting the London-Edinburgh RRA record tomorrow, and scheduling for the 12 hour and 24 hour records in addition.

Our own Frank Cubis will be timing them for the entire attempt.

The schedule can be found at http://www.dadswell.co.uk and it is hoped that updates on their progress will be available on the Time Trialling Forum at http://www.timetriallingforum.co.uk


Think of Frank when you go to bed tomorrow night, he won't be back to his before Monday night - although at least he doesn't have to do all the driving!

The organiser listed in the handbook died earlier this year, so if you want to enter the SCCU 25 on September 6th 2009 (closing date 25th August) then you had better send your entries to:

As can be seen from the 10 tables, last night was about the best night of the year, with everyone who rode doing their fastest evening 10 of the year.

Thanks to the Wheelers for putting the signs out.


And a special thanks to Ron & Doreen (and stand-ins Judy & David) for providing the teas all year.
And also to everyone who has provided cakes, biscuits and donuts during the season for our after race snack. (Personally, I really like the jaffa cakes!!!!).
Lisa

Just a reminder about Phoenix Barbecue Aug 15th. 6pm sat at Jake and Garys.
All members and friends and sat riders invited.
Bring something for cooking or side dish, rice, pasta, salad, rolls, pudding etc, and a bottle. If anyone has a marque bring it just in case!
Jake
Posted by Jake at 18:56 No comments: 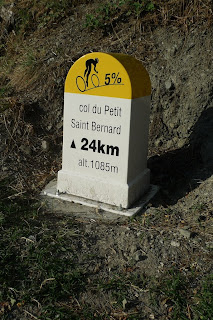 I've just got back from an enjoyable few days cycling in the Alps with my two sons. Our purposes were rather different - I wanted to cross some passes, revisiting old favourites and adding on a couple of new ones; they wanted high altitude training for a savage triathlon that they're doing in Norway next week. That means big mileages and big climbs. With me, it's one or the other these days, but with a bit of planning we were able to meet everyone's needs. We rode separately, but had lunch together every day, shook hands on some big passes and generally had a very good time. 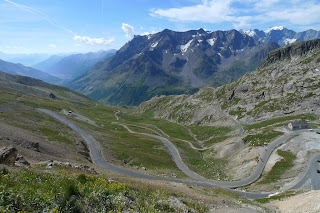 We chose passes that the Tour de France has been over, either this year or in the last couple. This gives good atmosphere, with the 'Go Wiggo' graffiti on the roads, and real humility when you compare the times of the Tour riders with your own. My passes were Petit St Bernard, Cormet de Roselend, Col des Saisies, Alpe d'Huez, and a double crossing of the Galibier, going Lauteret-Galibier-Telegraphe-Galibier-Lauteret. I've done each side before but the double was a treat. 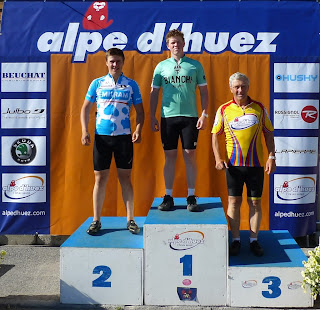 Here's the team at the top of the Alpe d'Huez. It was a very hot afternoon - about 34 degrees at the bottom, probably more part way up. I attributed my rather pedestrian time to this, until I found that Henry (he's the Bianchi one) had taken more than ten minutes off his personal best. So, just like Lance Armstrong on the podium in Paris last week, you can see that the chap in third place has the wistful look of one who realises that his best times are behind him, and that it's downhill from here. 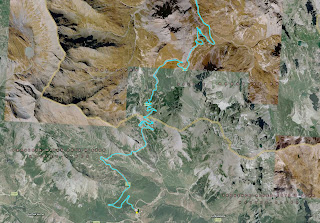 My ride reports wouldn't be complete without maps, so here are a couple - the Galibier and the Alpe d'Huez. The week's stats are 221.84 km; 6506.9 metres of ascent with a moving average of 13.62 kph. This last of course, is a balance of going up very slowly but down very fast.... Mark 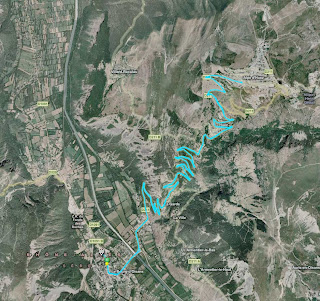 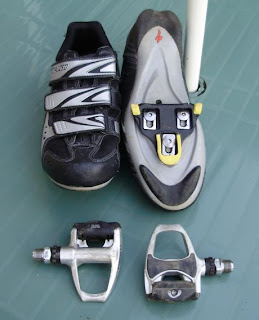 John Barron a friend of mine has a pair of size 8 Specialised shoes & Shimano Ultegra pedals as shown.He offers them at £20 .He can be contacted 0n 'jmgbarron@tesco.net'

Frank Cubis
Posted by Lisa at 08:20 No comments:

Robecca Romero and James Cracknell have scheduled an RRA attempt on the Lands End to John O'Groats mixed tandem record. Further details can be found on the RRA website: http://www.rra.org.uk/ look under "notices" for the original schedule (PDF format) and an updated one.

They aim to start on Monday 3rd August at 5am from Lands End.

There is a story in the telegraph: http://www.telegraph.co.uk/active/5940583/James-Cracknell-Lands-End-to-John-OGroats-cycle-record-aim-with-Rebecca-Romero.html