Also many thanks to Ron & Doreen Powney for taking me back to Robin Hood Gate, Richmond Park.

Frank
Timekeeper
--
Posted by Lisa at 07:31 No comments: Links to this post


Frank
Timekeeper
---
Posted by Lisa at 11:13 No comments: Links to this post 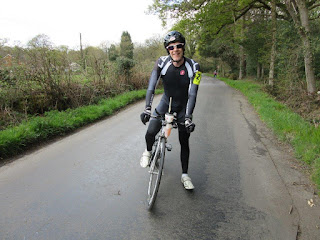 Simon just after the finish 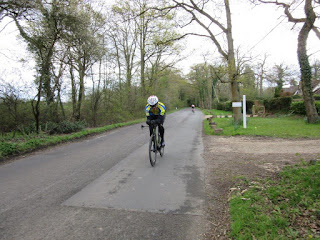 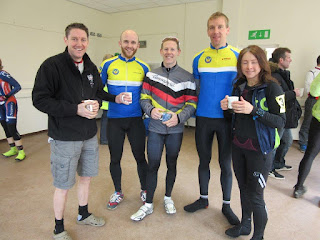 
Posted by wheezy at 19:39 No comments: Links to this post

KPRC were represented at Windsor Castle on Wed. 13 April when the Queen presented Paul with his OBE. For more details and photos go to CTC MWW Blog. 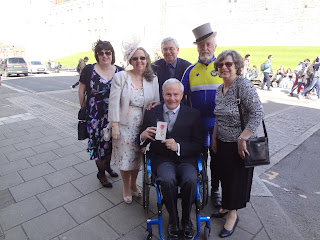 Posted by mike morley at 10:13 No comments: Links to this post

St. Raphael Hospice Cheam have a number of places available. See poster below. £50 to enter with minimum raise of £400. Contact Emily.


Posted by mike morley at 20:47 No comments: Links to this post 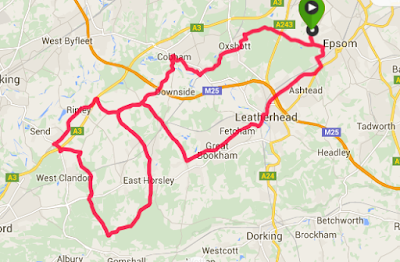 We are trying out our Cycling Weekly ride this sunday. Hope we get a good turnout. Long hill involved but you can cut it out and meet us at Pinnocks coffee shop in Ripley. The actual ride is sat May 7th. Meet Horton 9am for photo shoot and interviews first.
Posted by Unknown at 09:02 No comments: Links to this post

Pics from event thanks to Mike Anton - you know you'd like to buy one!

Posted by Lisa at 09:28 No comments: Links to this post

A picture of most of the KPRC members at today's Open 10. Thanks to all the members who made it possible and supported in any way. In particular, thanks to Ian Davies for promoting this event and doing a great job. Even the forecast rain (virtually) held off. 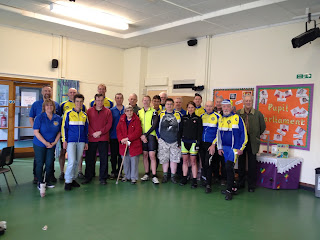 Posted by wheezy at 23:29 No comments: Links to this post 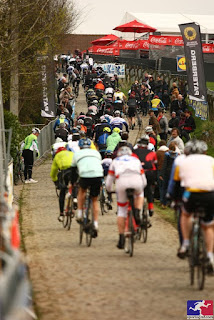 My Spring Classic this year was the Tour of Flanders.  The format was the same as all of the others I have done - a sportive on the Saturday, taking in all or part of the pro course, to choice, and watching the pro race on the Sunday, with some of the most enthusiastic fans in the world.

The Tour of Flanders is a very big thing in Belgium.  It is said that some 90% of the population watches the race, whether at the roadside or on the television.  No UK sporting event - quite possibly no other sporting event - has anything like the penetration into the public consciousness.  You were a pretty big guy if you were riding a race bike in Flanders last weekend.

My first classic, Paris Roubaix, is well known in Britain as a cobble race, and it's all about speed on long sections of cobbles, a hard and difficult thing of itself.  Liège-Bastogne-Liège, my second Classic, is all about the hills of the Ardennes, climbing and descending all day.  The Tour of Flanders is about the 'Bergs', short, steep cobbled hills that the pros ride repeatedly.  It's a completely different technique, and it's exhausting.  To give a local point of reference, if you were to take Barhatch, and Pitch Hill, and Combe Bottom, and White Down, and a dozen others and surface them with rough cobbles, then you'd have the same sort of thing.  It's completely different from anything I've done before, and it took a bit of learning. 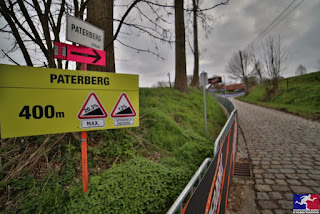 I chose the short course, at 71kms, as it took in all of the famous bergs and finished down the actual race finish straight, gantry, photos and all the rest.  You could do more, and many did, but I felt that this would be enough.  The disadvantage of this approach is that you're tipped in to the hard bergs very quickly, which is fine if you're local and used to it, but it's a bit of a shock for the man from Surrey.  My first berg was the Koppenberg, one of the hard ones, with 'babies head' cobbles.  I was following a Flemish woman, and things went well at first, but she began to swear mightily in Flemish (at least, I think that's what she was doing) before she lost it all with wild wheelspin and fell.  I was going very slowly, but had no option but to stop, as I was in no position to get around.  Then I realised that it was so slippery that it was more or less impossible to stand, and that walking was very difficult.  My new friend, who was fine, was angry because she had done the climb a few days before, and she felt that the wheelspin was a beginner's mistake.  We walked to the top and I rode on on the smooth, comfortable tarmac, thinking that it wasn't going to be much of a day if the rest was like this.

Thinking it through, I decided that my best chance on the bergs would be to stay away from other riders as much as possible.  I did this by either blasting to the front of the group I was with, to get a clear run, or by following the fast men and women, who dropped me once they started on the berg, giving me a clear run.  Even if one of them fell, there was still time to change course and carry on. 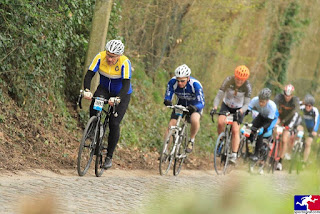 This stratagem may have been a bit selfish, but it worked, and I was able to ride all of the rest of the bergs, even the very difficult Paterberg, where I think I may have made a cameo appearance on Belgian TV, in the 'Old Bloke Rides Bergs' slot. 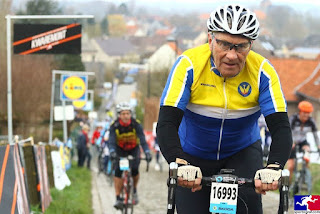 At the finish in Oudenaarde there was the usual excellent reception, a medal and chips and beer for those who wanted them.  I skipped that part, as I needed to get back to Gent to meet Maggie for lunch, so I went to the station where I found that the next train was not for an hour.  It's 27 kms from Oudenaarde to Gent, so I thought I'd give the famous Belgian cycleways a shot.  It was brilliant.  I took the main road, the N60, a dual carriageway a bit like the A3. It was flat and arrow straight.  Alongside the carriageway is a hard shoulder, of good width, and inside that a cycle lane that was smooth, well surfaced and continuous.  At every junction, and there weren't many, there were traffic lights that gave cycle priority, and, spookily, they changed as I approached.  So I went absolutely flat out from Oudenaarde to Gent, finishing off with more cycle priority until the cobbled medieval centre, which is car free in any case.   Lunch outside in the sunny square, with my race bike leaning next to the table.  People came and took photographs of it - dream world! 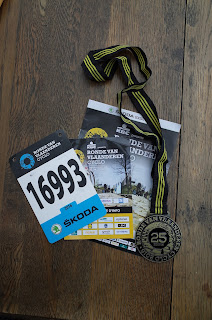 On Sunday we went out to the Oude Kwaremont to watch the pro race, both live and on the big screen.  A great race, which Peter Sagan won in historic style, and a great experience in the warm Spring sunshine.

A terrific few days away.