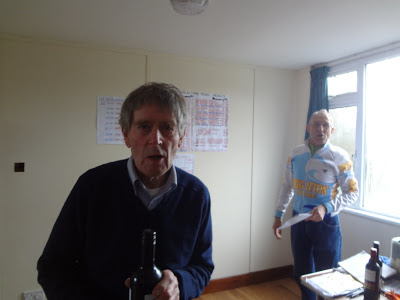 It's not very often I have appeared on the same events result sheet with a win along with such an illustrious champion as John Woodburn. Here he is collecting his prize for the fastest in age group 75 to 79 yr old with a time of 28min 32 secs beating Simon T with a time of 29.27 but to be fair to Simon he was on his training bike complete with mudguards. 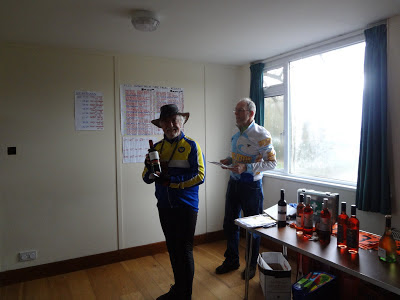 MHM is seen here also getting a bottle of wine for fastest in age group 7o to 74 yr old. Pity Ray was not riding! I too was on a touring bike with mudguards and pannier & could only manage 33.03. It was cold & wet. Good to see Ron & Brian marshaling & Judy on hand. Frank was finish time keeper. This event and Sunday's 25 TT were the first of the KPRC designated events for 2013 season and Frank was again out in appalling wet weather as start time keeper. I don't know how he does it year in year out he looked very wet under his leather hat at start. The same can be said of course for all the Marshall's & helpers & time keepers without whom these events could not take place. A special congratulations & thanks must go to Robin Johnson weekend organiser, event secretary & worthy competitor mus t be difficult to both organise & ride with very good times as well. John Woodburn did a storming 1.08.40 to again take the 75 to 79yr prize & believe it or not MHM also again got the 70 to 74 prize & surprisingly not because I was the only rider in age group. My time however was appalling 1.22.24 again on touring bike & this time I was thrashed by Simon T who must have been on a special breakfast with a time of 1.05.46 & I guess on his fast bike! My real handicap was one bottle of white wine and half of red from the night B4 at the Ibbo F&C supper! (see blog below).
And so begins the 2013 season with the new H/C points system for designated open events. Thanks must go to Brain for preparing the H/C & the first event was very close the second a walk (ride) over for Simon but honours even over the weekend. Well done Simon!