The evening will start with a short informal AGM where all members are welcome
to give us their ideas for next season.

A free buffet will be available throughout the evening.

More information and how to get to the venue can be found at
http://www.surreyleague.co.uk/news/agm2006.htm
Posted by Lisa at 19:54 No comments:

Sincere apologies to anyone who would have liked to come, but did not receive an invitation - there has been a scramble to find addresses for everyone and many were not found, even when they should be on record somewhere. Current numbers are 99 signed up and our limit is 100, so there is no room for second chances, I am afraid.
Lisa
Posted by Lisa at 19:40 No comments:

I think there are no changes to Year Bests or the Trophy allocation as a result of those rides.

So congratulations to Ann on clinching the Ladies Championship Trophy.
Lisa
Posted by Lisa at 17:53 2 comments:

Click on this and watch Gary nearly end up in the shrubbery !
Posted by Jake at 20:16 No comments: 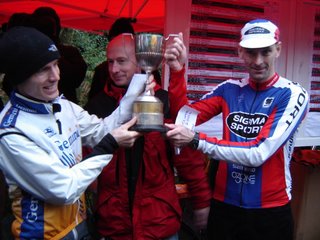 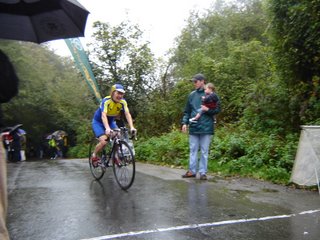 Hero Gary Dodd and Bill Bell, joint winners of the hill climb in 1.49.07

And heroine Ann Bath, who rode all 4 hill climbs again this year
Posted by SiandJen at 19:48 No comments:

http://www.londoncyclesport.com/news/article/mps/UAN/1046/v/1/sp/
Have a look at this link if you are interested in doing training days in November. There's a women's only day (just an afternoon really) on 11 November which I plan to go to, but 2 dates open to everyone on 5 and 10 November. It would be more fun if anyone else fancied joining me on the 11th – its at Newchapel from 12-3 and costs £4.

Florence
Posted by Florence at 16:49 No comments:

Gary Dodd no longer rides for the Kingston Phoenix (having had a much better offer from Sigma Sport, of course), but being married to Jake he can't get away from us, so we were all there cheering him in the Bec Hill Climb on Titsey Hill, on the Surrey/Kent border.
He was number 20 in a field of 89-odd riders and, in his first Time Trial as a genuine "Vet" he shot up the hill in a storming 1:49.1 - not quite as fast as his 1:44.4 record, but a race-winning ride neverless. Then we had to wait for over an hour until the final man - last year's winner Jody Crawforth - to see if it would be the best time today.
Well, actually it was a lousy day for it: the rain started for the last 20 or so riders in the morning Catford Hill Climb on York's Hill, and got heavier and heavier. It wasn't an especially cold day, but the wind chill on damp bodies was pretty high, leaving the spectators shivering by the end. Once again this year, both Hill Climbs had the field and spectators to give the day the feeling of the classic events that these were 25 years ago - when the results of the two events would have been the top story in the following week's "comic" - and all this despite the rain.
The contenders came and went, and the PA system kept us up with the results. Only a handful of riders bettered the 2 minute mark, and Gary's name was repeatedly mentioned as the early leader. Then came number 85 - Bill Bell, winner of the morning's Catford climb. His time came over the PA system - another 1:49, but not the seconds yet. Jody Crawforth finished and the crowd surged up the hill after him.
Enjoying the closed road this year - by far the safest arrangement for the event and the general public, especially as the route around is trivial in a car - the crowd gathered around the result board. Crawforth's time 1:52. So at worst Gary was second....
The timekeepers conferred. A buzz went round the crowd - both riders had clocked 1:49.1!
The timekeepers looked at their watches again, and attempted to split the riders on hundredths but, no, they had both been clocked at 1:49.07 and could not be split.
So Bill Bell (Gemini BC) and Gary Dodd (Sigma Sport RT) are the joint winners of the 51st Bec Hill Climb.

Not bad considering that Gary's aim for the event was a top 10 place and 1st veteran.

P.S. Ann also rode and did 3:56.2 with 3:58.7 in the Catford HC in the morning - and of course, she rode the two Brighton Mitre Hill Climbs on Saturday, but I've no idea what she did in them - other than win a snazzy bottle cage!

(Jen, did you get a decent pic of Gary and/or Ann on the climb - that we can add to the post? Either email it to me, if you did, or put it in another post and I will put it together)

We Welcome any new riders on our rides

After our advert in the Guardian Paper, we have had 5 new people out on our rides.
I would like to welcome them and any other people who fancy joining us for our lovely rides through the autumn.
It has been pointed out that we don't mention our runs on the home page and there is no phone no to find out more about them, so this is my phone no 01372 720061. 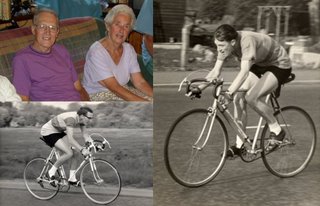 Just as we were looking forward to seeing Fred Buckner and his family again, at the 70th Anniversary Reunion, news comes from his son, Ian, of his death.

Ian writes:
"I have some sad news about Dad; He passed away late on Sunday night in Dorchester Hospital. As you know he was looking forward to seeing the Phoenix in November but sadly not to be. In the end it was a release for him as he did have a bad last few months in out of hospital. He died peacefully with his family there by his side all day Sunday.

He enjoyed catching up on the club website since he became an internet user a short while ago.

I have spoken to Ron Osbourne.

It will be good to see any of Dad's old cycling mates if some can make the funeral next Tuesday 24th October at Poole crematorium (service commences at 11:00am), Gravel Hill, Broadstone, Poole and afterwards at the Black Bear Hotel in South Street Wareham.

Mum wishes that the money for the 70th lunch be donated to the club funds.

Thanks and bye for now, Ian."

The pictures above show Fred in 2003 when we met with him whilst on the Birthday Rides at Warmwell (colour), racing in 1976 (b&w) and racing in the 50's (sepia) [The last two from the Joe Picton Collection.]

A good day for me in this event after the aborted previous two events. My time 1.7.38 taking 1st on standard. Scratch winner -Danny Axford with 52.39. Chris Thain ex Phoenix rider did 1.10.33 with a puncture.
Posted by Ray Dare at 18:44 No comments:

Times now at beginning of line: (assuming that I didn't write the standard down instead!!)

The "vet" being paced is in blue.

Florence our press officer has succeded where many including me have failed. She has got us and i think a photo in the Guardian page 42.
This is the best advert for our club and should get lots of local riders out on our runs.
The run this sat is to Stoke D'Abernon garden centre as many of us are doing the Gentleman Grand Prix.
Ann, Jackie, Andy and I are doing the Brighton Mitre if any one wants to join us?
Sunday week is the Bec Hill climb with a record 80 plus riders inc Magnus Backstead and Gary Dodd current record holder! A few of us are going out to watch it at 2pm and also the Catford in the morning.
Jake
Posted by Jake at 17:20 No comments:

This is my last stab at a 25 as havn't got a time for age 80.
Interesting to note that ex Phoenix rider Chris Thain is on the Start Sheet.
Posted by Ray Dare at 10:24 No comments:

Reported in "The Week" magazine...

after a police campaign in London to catch rogue cyclists netted twice as many motorists.
The drivers were typically caught stopping in space designated for cyclists or using their mobiles at the wheel.

Letters to the Guardian:

The fine for driving while using a mobile phone is £60 and the fine proposed for consistently not using a bell is £2500 or even prison. Am I alone in thinking our legislators have completely lost the road safety plot? 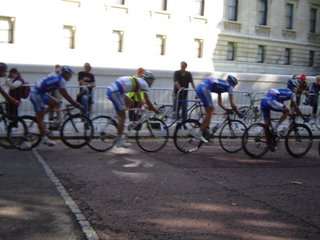 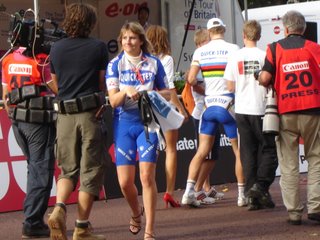 Jen
Posted by SiandJen at 19:05 No comments:

The new edition of the Surrey Cycle Maps is out, Free from all local libraries and Council offices and cycle shops.
There are 8 to collect and the best bit is that on map 3, the Epsom one, We the Kingston Phoenix are on it!
If you remember we had a photo shoot at Horton Park back in the summer with my friend Denise who was helping Alan Fordham out .
I have sent E mails to Surrey County Council and Epsom Council to be put on their leisure and sports lists, as when I looked at them they had nothing on cycling at all. So we might get some new riders in!
Posted by Jake at 17:19 No comments:

So, no change to the Ladies Championship today, but I understand that Ann and Jackie are entering the Brighton Mitre 25. So Jackie needs to do a 1:9:20 to overhaul Ann and take the trophy. I think she is well capable of a time like that, but the crunch is can she manage it this late in the season.
The trophy is in Ann's favour at the moment, as she has done the rides and is there to be knocked off top spot - but someone needs to improve to do that. Jake still needs to do better than a 1:11:19 but isn't terribly excited about doing any more races this year. I've had enough (not that I'm going to take the trophy off anyone!!!) this morning my rear Ergo lever refused to change gear on my race bike, so I had to hastily swap pedals and wheels onto the lo-pro for this morning's event - something you can do without at 7 in the morning.

Anyone else ridden this weekend??