Notice is hereby given that the 2015 Annual General Meeting of the Kingston Phoenix Road Club will be held on Wednesday December 2nd at the Worcester Park Athletic Club, Green Lane, Worcester Park, Surrey; commencing at 8pm sharp.

All motions for inclusion on the agenda and any early nominations for Officers or committee Members, must be lodged with the Honorary General Secretary at least 14 days prior to the AGM – no later than 18th November 2015. All motions shall be in writing and signed by both proposed and seconder. Any advance nominations shall also be signed by the nominee indicating their willingness to stand. Proposals and nominations by email will be accepted.

Club Subs for 2016 are due as of 1st November 2015 --- ie Now!
See Steve Hillier to pay at the AGM—don’t forget wallet or cheque book
Senior, 1st claim membership is £15: Cheques payable to Kingston Phoenix RC
Posted by Lisa at 12:24 No comments:

Hi all it was great to see Frank is back on his bike - amazing and he is truly that! Due to his fitness and a very remarkable man he was out on his bike today with the CTC MWW at Ellery Hall Teddington and he rode there on his bike  to greet along with Ron and Doreen, Ray Dare and all his CTC mates. Judy also made it on her bike and thanks to Ron Pat Mathews and others went to lunch. Pat phoned me this evening to say thank you for the cake etc which it was my pleasure to provide to celebrate my B'Day on 29 Oct., a memorable date as it was 4 years ago when a former KPRC club member Allen Roodenburgh passed away!
Its unlike me but I do not have a photo to show but Frank who has been without a computer for some time told me that the KPRC AGM will be on first Wednesday of December and he will put out a notification to this effect. So put it in your diary and do try to attend!
Posted by mike morley at 23:46 No comments:

As clocks change tonight we get into the winter rides which start at 9.30 to avoid frosty mornings. Horton Park carpark by toilets. I cant lead every week so we wont have a ride every sunday unless someone steps forward once in a while. One extra leader a month would be great. This sunday 25th Oct we doing leisurely run to Rudgwick brickworks cafe 45 easy paced miles. Next week is The Southern Counties dinner so im not out. I will post my rides every week on this blog so you know if there is one.
Posted by Unknown at 15:33 2 comments:

Redmon 2-up from a H/C perpective

Well done Simon & Dale based on Vet Standard you were the clear winners and well deserved! As for the rest there was 8 seconds between difference on Vet Standard - now that is very close from a H/C point of view. Now then Brian a challenge for 2016. It was a great event and I enjoyed it immensely! I understand that the Vet standard was based on a 15 mile TT with no correction for the 18 mile event i.e. the Vet standard was not 15 divide by 15 X 18 corrected which explains why so many were negative!
Posted by mike morley at 00:42 No comments:

Well done Wheezy for great photo's. As special thanks from me to James "Tim" Roberts for pacing me you were perfect and much gentler that son Tim. James I have a certificate for you (in Tim's name) but maybe we can Doctor that you deserve it (even though I paid for it! Joke). I took quite a lot of photo's including the winners as I stayed for the presentation but I will just publish a few.

First one is of Sean Yates signing a book for a lady! Second is a sneak pre-view of the result sheet. Mike Morley was accredited fastest Old Fart on an Old bike on standard time. It seems that I was expected to ride an old bike which I have but I had not got it ready. So I had to be honest (what me!) and decline the award as I rode my new BMC. You will need to magnify this photo to see result. 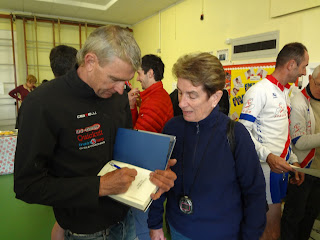 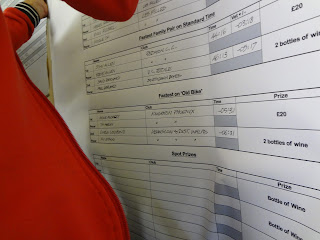 One more photo the even more evergreen Ray Dare 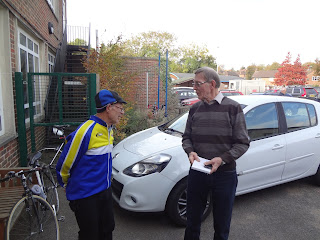 A great event this morning with 7 KPRC riders out taking part in this 2 up TT. It got a bit windy later on but conditions not too bad. Another great ride by Dale and Simon T to be the 7th fastest team overall. Dave Watt did a great job towing me round for 20th, with James 'Tim' Roberts pacing the evergreen Mike Morley. Rachel Watkins was riding with her brother Steve, ably supported by Joe B. 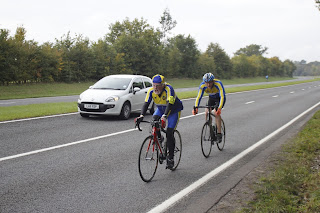 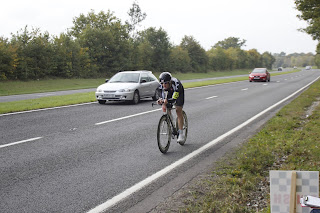 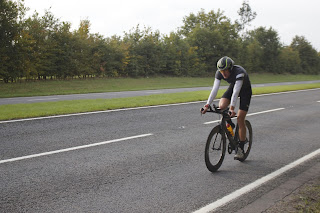 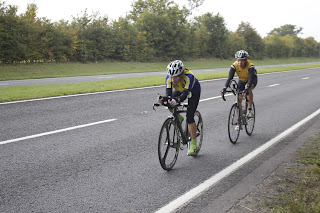 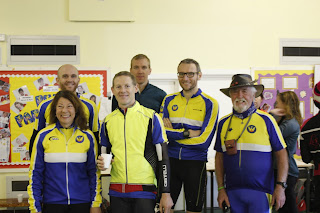 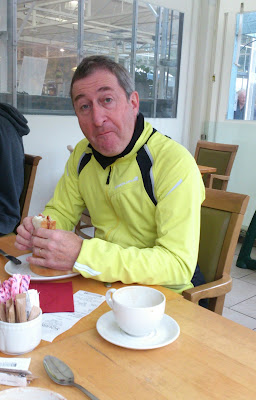 It's well known that service can be a bit slow at the garden centres we go to on Saturdays. But spare a thought for poor Patrick, he'd had no breakfast so he was peckish and ordered an egg and bacon roll. Over 45 minutes and a false fire alarm later he was served with an egg and bacon sandwich! It's usual to wash down your food with a drink but as you can see Patrick 's cup has long been empty. So Horsley beats the Vineries for the slow service prize.
Posted by philip at 17:35 No comments:

I spoke to Frank this morning and apart from the weather he is in good spirits! The good news is that he will have his plaster removed Monday, some 3 weeks earlier than expected and with a bit of luck maybe home by end next week.
Posted by mike morley at 11:44 No comments:

Someone reported that there is a problem with the forum, so I've been looking into it.

It appears that the people that host the forum have had some sort of catastrophic failure, although I can't actually find anything that tells me what exactly it was.

The forums themselves are backed up, so nothing prior to the incident should be lost although if it has been possible to post anything "during" the incident - if the board has reappeared briefly - then that might be at risk.

These people run paid-for forums, as well as free ones like ours (paid for from advertisments that appear on it) so they know what they are doing, but the free forums are at the back of the queue for being fixed!

I don't know the exact details of server repair, but if you have ever defragmented a hard disk you know that it can take hours and the same principle applies here - but for servers with multiple hard disks and loads and loads of data!

I'm not sure exactly how long things have been off-line, but it seems to have been over 24 hours already and the tech staff are hopeful that things will be repaired and running again soonish...

---
How many members are on facebook? I've been wondering if there is any value in creating a private facebook group for members. What does anyone think?

A lovely day with lots of support. Thanks to the many KPRC members who took the trouble to cycle or drive over and cheer the Phoenix riders. Dale was quickest once again, with Simon just nabbing second spot in front of David. Mike had a good ride, but the less said about my effort the better. Hopefully this event will still be on next year for me to have another crack at it. 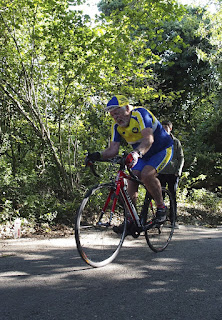 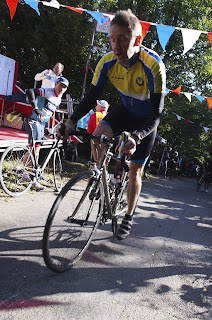 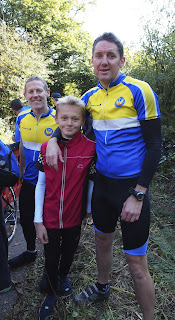 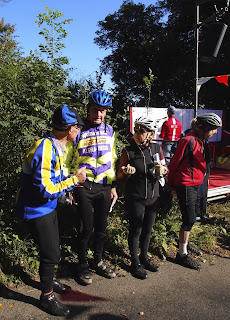 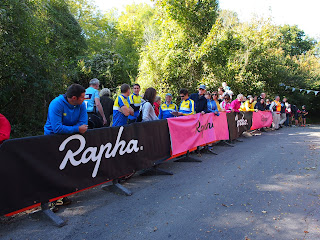 or images of it below: 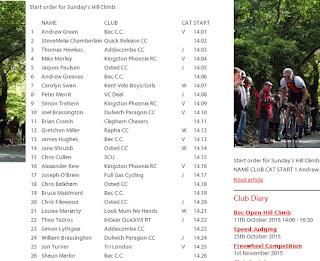 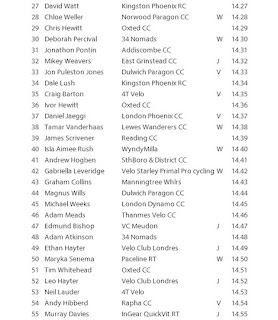 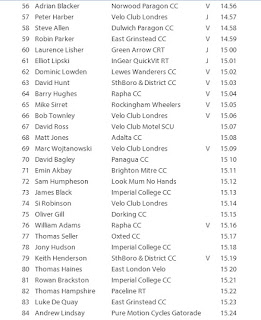 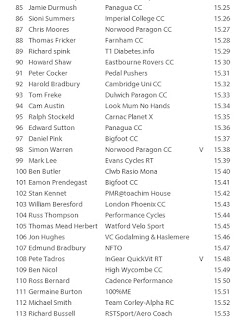 This weekend, it's the last event in the club calendar, with the Bec Hill Climb. It's our first team entry in this event in a few years and we've got a few other members out to support. It should be a good afternoon.

There's only scratch points available with no handicap points for this event.

The start is 2pm after the Catford in the morning on York Hill. One reason I believe that we got on the start sheet is because KPRC members have always supported the event even over the lean early years when the event did not attract full fields. We have always had many members act as spectators and that is recognized by the organizer. So Please members turn out in full as much as you can to support our five riders. Not sure if that's a record entry for KPRC. I know that Gary Dodd has won this event more than once but maybe not as KPRC.
The weather forecast is favourable at the moment thank goodness. I remember riding out some years ago when I was a member of SRCC and we had snow and horrendous cold rain!

Well Dale after your Triathlon in Barcelona you should be screaming fit - well done we at KPRC are proud of you and happy to have such a fast rider developing our club capabilities and profile - keep it up!
Best of luck to all!
MMHM
Posted by mike morley at 22:55 No comments:

Last year Frank Cubis timed this very interesting hill climb event which takes place on the newly surfaced track behind Denbies. Franks enforced absence was missed by the organizers Dorking CC and Reedhill CC but the event went off very smoothly with generous sponsorship and good prizes.
The event started at 8.30am with the first round of 66 riders including sadly only 4 ladies. Jake maybe you should have a go next year. There were a number of DNS including last years lady winner Maryka Sennema along with about 10 men.
The event starts off with two riders setting off together and riding an elimination. The first over the line goes forward to the next knock out round and so on the the Final and Semi Final.
Last years second lady Alice Lethbridge was the winner of the ladies and the winner of the men's was rider number 1 (not sure name as start sheet I have is smudged). Photo however below with partner at the finish! 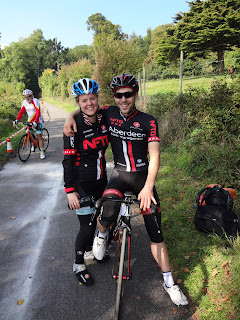 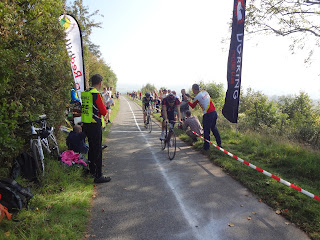 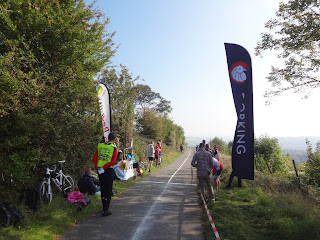 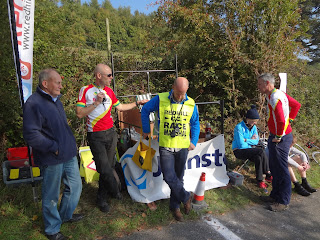 As if tearing up the TT courses of Surrey was not enough, Dale Lush took part in Ironman Barcelona today and absolutely smashed it with a time of 9:43:40, which included a 4:41 bike leg followed by a 3:41 marathon. Dale was aiming for a sub 10hour time having recently raced 10:02, so to take over 18 minutes off shows how fast he's going at the moment.

This is a brilliant achievement and saw Dale ending up being 58th in his very competitive age group  and 224th overall. Chapeau Dale.