Having now looked at the official results I have to re-iterate my congratulations to Grant and Brian for finishing a very creditable overall 9th on standard and just being pipped by 5 seconds in 8th place by 66yr old vet C. Walton from Redmon. Jake and Simon were 18th so a very creditable performance. Even Morley and Andrew finished 31st so even a slightly disappointed me failing to beat standard was not beaten to death! If I observe correctly Redmon got the first place for a team of 3 pairs on fastest standard, Pearson were 2nd and KPRC 3rd so not bad if such a prize existed. Maybe we can improve on this for next year.
Posted by mike morley at 21:22 No comments: 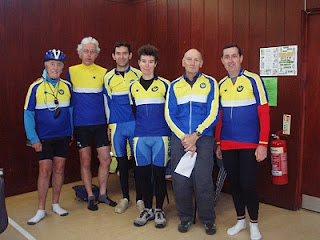 Well done the Kingston Phoenix fielding a team of 6 riders. Fastest were Jake paced by brother Simon in a time of 42:42 (PB for Jake) followed by Grant paced by Brian 45:25 and yours truly paced by Andrew in 50min dead which is the feeling we had as we crossed the line. Grant and Brian did a flyer with +4:51 on standard. Jake and Simon +00:53 with MM/AH -2:03. A cold morning but a great day to ride our last event of the season. Congratulations to the Redmon for a well organised event and thanks to all helpers, marshals pushers off and time keepers!

a Warm Welcome to John Bellamy our latest Saturday Morning Rider
Posted by Pete at 16:05 No comments:

Thankyou to Jo for providing over 30 members of the Phoenix and Clarencourt with a very interesting and social evening, the exchange of question and answers flowed throughout airing several interesting facts about various members secret lives!
Posted by Pete at 12:36 No comments: 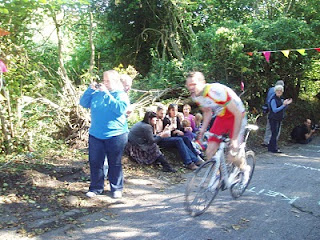 Nathan Chamberlain VET from Redhill CC having a go! Andy can be just seen in background. 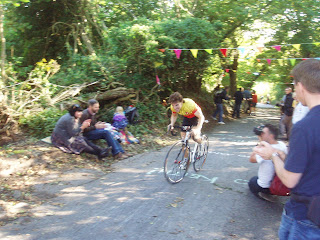 More action watched by Ann Bath, Pete Barnard and Mark Gladwin. Kingston Wheelers had a number of entries but non from KPRC. How about 2011? Maybe the BEC can introduce a new category of VET rider based on age standard for the hill! It was not a full field but there were 24 VET riders. Come on Ray how about you and me and a few more over 40's having a go. Mark you should do well and we could even go for a VET's team award. Total prize money was over £3000! 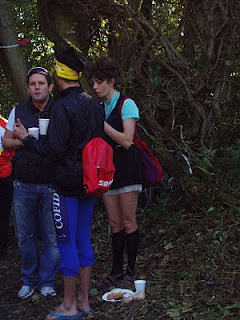 Two of the most remarkable things for me was the Lady above who appeared to be clad in Pyjamas or as someone observed "French Knickers" That's what I like about cycling it takes all sorts! The other remarkable event which Gary Dodd will no doubt be amazed at was that a young 15yr old rider by the name of Germain Burton won the event and beat the Catford winner Robert Gough, that morning! His time was just 2 secs outside the event record - WOW!!!! 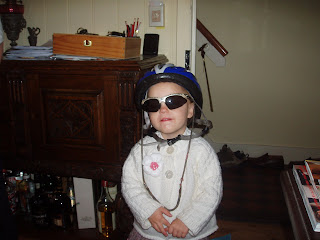 Millie 2.1/2yrs getting ready for the ride. It's important to start them early. 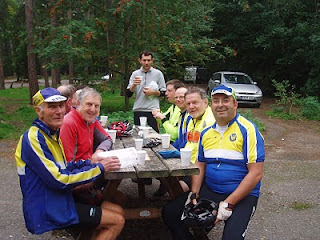 Maybe a third of the riders out on Saturday 9 Oct. It was a good turn out and the off-roaders arrived later. Some of the riders went to look at Speilbergs epic on WW1, no doubt more from Pete about that!

Club Clothing at the Club Room

On Thursday night (14th Oct) I will be bringing along a selection of club Polo shirts available at £16 each.

Simon will be bringing a selection of club kit. You can see what is in stock and the prices by using the link found at the bottom left of the front page of the club website. Simon will also be preparing the next order.

A good example of staying in control of the bike in difficult conditions - the rear tub rolling off the rim. And a rubbish example of the backup provided to the rider. This all cost Dowsett a likely medal at the World Championships.
Posted by Lisa at 17:50 No comments:

Now that I've been to the District AGM and Date fixing, I can confirm that the date for next year's Open 10 will be Saturday, 7th May 2011.

Simon and Jen have received a mention in this report for organising the ladies road race.