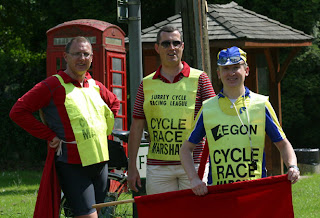 Hi all helpers and KPRC Please can you put this in your diary, if you are able to help at the ladies race on Sat 22nd May at Ellens Green Memorial Hall 12.30pm 42 miles Many thanks Simon
Posted by Pete at 04:04 1 comment:

11 days off the bike, got home at 3.30 am friday morning (4 days late).
Yet still did a 1:3:40 in the Newbury 25 the next day and I honestly didn't push it once, changed down on every little drag and just tapped it into the head wind.

I was as close to the winner as I've been since my come back, quite bizarre.
Julie Shaw came passed me though as as if I wasn't moving, she certainly rolls the big gears (5 minutes off her best though. Roll on the E2 in a few weeks!

For those that care the ultra fast Andover 10 course is lost for ever from June, traffic lights.

From the Phoenix Open 10 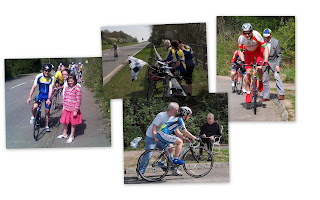 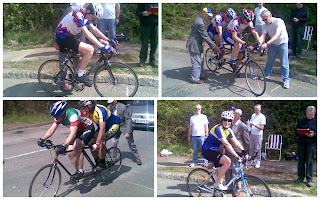 Pictures from Mark & Pete
Posted by Pete at 22:33 No comments: 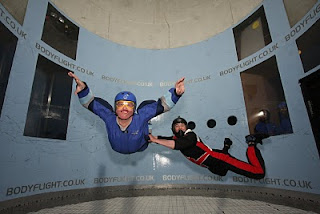 One of our members doing a little wind tunnel testing - do you recognise him?

The first SCCU 50 miles road time trial on 29 May 1910 attracted 118 entries. After heavy overnight rain the first rider was sent off at 3.30 am on a course between Crawley, Woodhatch and Godstone. Over half the field failed to finish the event mainly due to the state of the unsealed roads causing so many punctures. At that time most time trials were run as Handicaps although the fastest rider in open events usually received an award. Most trophies could be won outright with three wins. On this occasion fastest man was Geoffrey Cumine, Southern CC, who became the first recipient of the Newman Godward trophy. The event continued to receive over one hundred entries each year until the 1914-18 war stopped virtually all competitive cycling.

Unfortunately the Newman Godward trophy was stolen while in the possession of Maurice Selbach, a leading speedman who had won it in 1919. A less ornate replacement obtained under insurance was eventually won outright by the great Frank Southall and is now the BAR trophy of the Norwood Paragon CC. James Blair, SCCU President, donated the next trophy. This had a very short life being won outright in 1931 with three consecutive wins by George Jenkins, Hastings & St Leonards CC. To provide a new trophy, the Vice-Presidents (14 in number at that time) were persuaded to contribute to the handsome silver tankard that is now a perpetual award for the fastest time in the SCCU 50. 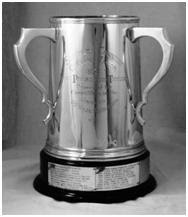 During the 1920’s the Counties had about 90 affiliated clubs and entries increased to between 200 and 300. To relieve the strain on timekeepers and marshals a ‘second class’ 50 was introduced in 1930 for those riders with times slower than 2.30.00. Towards the end of the 1930’s there were so many wanting to ride a third 50 was introduced with clubs arranged alphabetically into three groups, each event receiving 80-120 riders. The award, the Tacagni Cup, for the fastest ‘second class rider’ was maintained, the qualifying speed being adjusted from time to time. This is the oldest trophy held by the Association and deserves a mention.

A racing cyclist in the days of high bicycles and solid tyred safeties, J. P. C. Tacagni was a well known official on the London tracks when he became a Vice-President of the SCCU. Following his death in 1936 one of his cherished cycling mementos, the very first award he had won, a silver-plated cup for second place in an 1878 road race, was passed to the SCCU and became the annual award for the fastest ‘second class rider’. 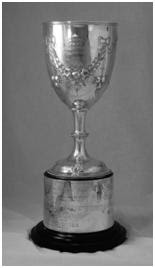 As interest in cycling began to decline in the 1960’s entries for all SCCU events tailed off and by 1975 only one 50 was required each season. Although support from affiliated clubs recovered from the low in the 1970‘s it was felt in 2008 that London South District would benefit from another Open 50 being promoted. The SCCU therefore decided to make their event open to all riders in future.

Reverting back to the early years, the Southern Roads Riding Association formed in 1893 ‘to bring order and regulation to the uncontrolled road racing south of London’. On 23rd September of that year they organised a Handicap race to find ‘the 50 miles Champion of the South’ and their President, T. H. Roberts, donated an imposing shield for the winner. Fifteen riders entered and the illustration below, taken from the Southern Counties Gazette of August 1910, shows them assembled at the start on the Balcombe road between Horley and Crawley, within a mile from where the Counties 50 started in 1910. With pacing permitted this type of racing was soon banned by the National Cyclists’ Union.

The SRRA, after trying out their event three times on Herne Hill track, lost interest now road racing was forbidden and they disbanded. The newly formed Southern Counties CU inherited the Roberts Shield and this was awarded at a track meeting for about 10 years. As support for the meeting went into a decline, the shield was transferred to the 50 miles time trial where it remains as a prestigious Team award. 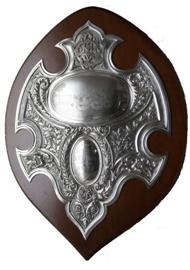 A reminder that the 50 counts for the SCCU BAR’s for both men, women and veterans.

I am one of the lucky few hoping to fly to Mallorca this coming weekend. Unfortunately last Sunday, whilst out cycling with Steve, the front right gear lever snapped off my road bike.
I immediately deposited the bike at Halfords, partly as this is where it was purchased and partly being the nearest bike shop open on a Sunday.

However, Halfords have been predicably useless and unable to guarantee that the part needed will arrive in time to fix it. I was therefore wondering whether (as a back up plan) anyone would have a suitable road bike I could borrow/hire. I have a new bike bag and protective packaging and would, of course, fix any damage in the event the bike is damaged in transit.

I have already checked the main bike hire shops in Mallorca and they appear to be fully booked up.

Thanks to Mike and Jake for honouring the Club's committment to the SCCU for marshalling in the 25 last Sunday morning.

Our other committment is for the SCCU 25 on the 5th September this year for which we also need to provide 2 marshals. Volunteers step forward now, please.

Also I need assistance for the 50 that I am promoting for the SCCU on 27th June.


The volcanic ash cloud has stranded John and Carolyn without their bikes, and they may not be home in time to marshal for the 10 on Saturday, so Ray has volunteered to step in.
Posted by Lisa at 11:38 No comments:

At last I cycle against one of the top pro's. He has finally realised they he can race me at my standard on my turf. (actually it would appear that he is younger than me).
The legendary Sean Yates....this is your day!

Extract from the Open 10 start sheet...

I'll catch him - at the HQ afterwards for an autograph!

Rachel Chrystal and I rode the 3 up on a lovely warm sat afternoon !
Unfortunately Chrystal had a very painful tooth and sinus infection but didnt want to let the team down. We rode very well as a team doing 40 revs on the front then dropping back to rest. Lots of pot holes on course and other teams had punctures. We had one car tear past us coming up to a road narrowing kerb who promptly stopped to let a car come the other way and we nearly rode into him !
Chrystal suffered at the end but we finished at speed as a group.
Thank you Chrystal and Rachel for answering the call for a team.
Posted by Jake at 17:20 1 comment:

I am running the club open 10 in 2 weeks and am having trouble finding the numbers.
After Joe ran the open 15 last year someone took the numbers home.
Can anyone remember who.
I have all my marshalls now thank you , all I need is more cakes , I have 4 offers so far !
thanks
Posted by Jake at 20:45 4 comments:

Other ways to get your name in print

It turns out that there are many ways to get your name in print in the cycling press, and our Tony has found one of them: 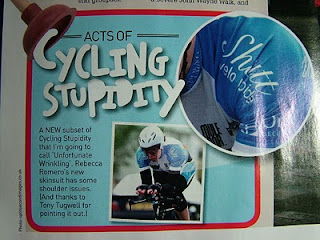 Thanks to Tony for the picture from Cycling Weekly.
Posted by Lisa at 09:30 No comments:

Frank Cubis
Posted by Lisa at 19:22 No comments:

As part of our membership of the Southern Counties Cycling Union (SCCU) we have to provide marshals for some of the events promoted in their name. Their secretary bases this on the number of entrants in the corresponding events from the previous year so this year we need to provide 2 marshals from the KPRC for both the early season 25 (April 18th) and the September 25 (date not in front of me!).

Also I need some extra help in the 50 that I am promoting for the SCCU again this year, but at least that won't involve standing for 3 hours with your arm out on a roundabout! And all volunteers are gratefully received for the 100.

Jake has volunteered for the April 25 as one of the two marshals that we need to provide - if no one else comes forward, then I get volunteered - and Pete and I had other plans for the day.

If you volunteer sooner rather than later, the start sheet and details of the marshalling position will be emailed direct to you by the organiser, otherwise I get a paper copy sent to me to pass on...

As this is a nominated club event, ideally we need someone who is not currently racing, or who didn't plan to ride that 25. We are required to provide 2 marshals, but extra volunteers mean company or a relief while you go in the bushes. As yet I don't know the assigned place (the plum job is as a "spare" marshal - unless you are required to fill in for someone who fails to turn up on the day, you only have to get up early and can stay in the warm HQ).

Finally anyone who does volunteer would be wise to wear skiing kit or similar, it gets a bit parky standing with your arm out for 2 hours at this time of year!!!!

Frank Cubis
Posted by Lisa at 20:23 No comments:

Just to remind anyone not helping in open 10 to enter if they can.
i still need one marshall for end turn as Charlie away now , and another pusher offer to help Tony Tugwell.
Can anyone donate cakes for cake stall as all proceeds go to club dinner funds !
Either bring them out or bring round to Jake or Brian as Di in charge of catering.
Posted by Jake at 09:56 2 comments: