I have set up a fantasy tour team on the velogames.com website and I have also set up a Kingston Pheonix Road Club league.  So how about putting your own team together? Is Cavendish your sprinter or maybe Griepel?  Nibbles or Froome for your GC contender?

So, go to Velogames.com and register, then pick your team.

Go to the manage your team page and enter the following code to be included on the KPRC league.
28181652.

Winner of the league in a month's time gets a bottle of bubbly and a week'a supply of croissants.

Southwater Park. Leave 9am Horton Park Epsom, pick up anyone Pebblehill 9.45. All welcome as usual.
Posted by Unknown at 18:36 No comments: 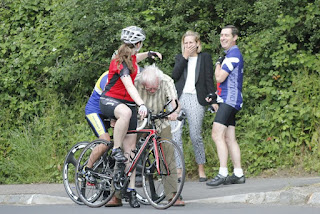 Stuart adds a new dimension to the push-her-off role.
Posted by Joeb at 16:25 No comments:

Congratulations to all who entered and as Frank says for finishing safely, Well done Lynda you made the right choice in the end winning both the fastest ladies (that would not have happened with me even in a skirt) and you got nearest the average. As for Tim & me we might have scraped under the 25 mins, as Philip said if I had not gone on the front at all!
Well done Simon T & Dale what a fantastic time only to be beaten by marvelous Marcus Solo!
Good to see Caroline & Barry competing together in preparation for their forthcoming Nuptials.

Here are some photos at the end, sorry didn't get winning ladies and only managed one of  Geraldine on way home over Box Hill on her warm down. Sorry Andy missed you!

Final photo is of sunset over Epsom Down's a lovely sight at the end of a good event! Well done everyone. 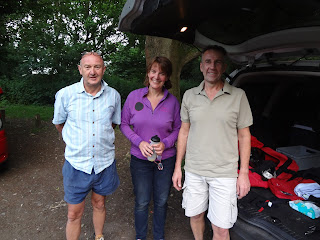 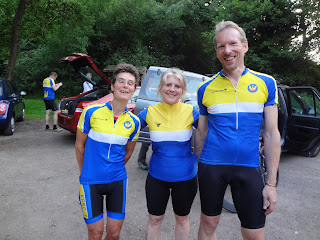 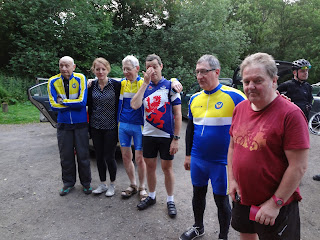 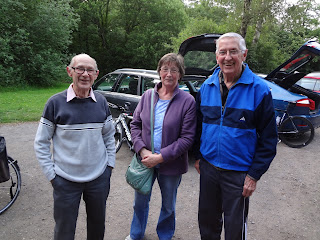 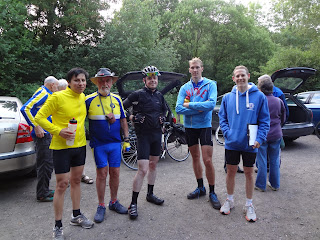 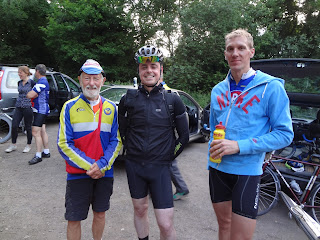 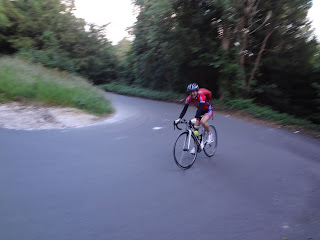 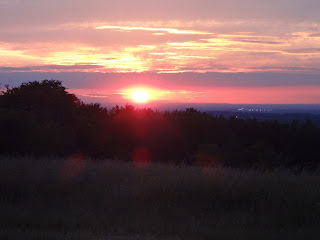 All finishers to receive 2 scratch points
Posted by Lisa at 05:02 No comments:

Please go to the CTC SWLondon Blog and read my account of the MET's attempt to get cyclists to understand the problems HGV drivers have in seeing cyclists in blind spots. It was an eye opening experience to be invited into the cab of a very expensive massive Merc truck, sit in the drivers seat and be demonstrated the blind spots by a police officer who positioned himself around the truck in the blind spots. I have to applaud the MET for this initiative, which clearly would cost a lot of money to stage. Look out for where the next demo takes place. I think it would be well worth while for all of us to go through this demo when the opportunity arises around London. 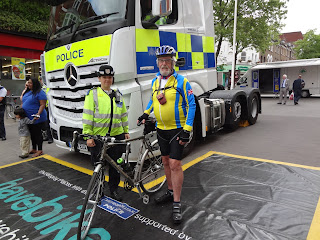 its also worth noting I got a free Bike Register on my Van Nich with ultra violet coding which is now on the national data base to help recover if stolen.

4pm at Jake Garys garden. 29 Kendor ave. Bring meat or something for the buffett and drink and chairs if needed. All members and family invited. All cycling friends invited. I wont be cooking so we will need volunteers after Brian has got it going. I wont be sorting food or serving drinks so find a home for your food using plates and bowls in my cupboards. Make your own tea coffee etc. Pray for good weather this year, it chucked it down last year as we watched Cav crash out of the tour on telly! Any questions email me.
Posted by Unknown at 19:48 No comments:

Henfold Lakes - up in smoke

Sad news about one of our favourite local cafes. Will probably make Tan House very busy. 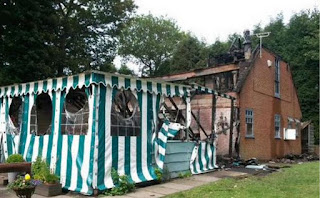 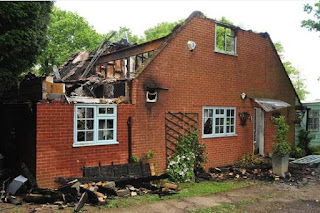 As we had not had enough from our open 10 seven riders had an enjoyable ride to Strawberry Fields in Horsham. MHM suffered badly on the steeper hills which is par for the course for me in my later years. However to record the ride and to thank Jake for taking the time to organize these rides here is a picture without the "Beatles" Strawberry Fields for ever! 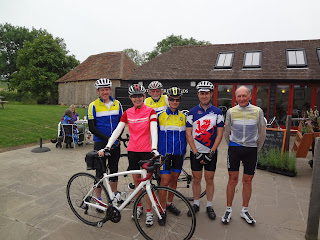 Well done Ian D for despite the glitch on CTT entry for organising such a good event. We were blessed with good weather.
Congratulations to KPRC for taking the team prize even though this was by default of a DNS of the 3rd member of Pedal Heaven. (Who thought of that name I can think of better ways of imagining Heaven).
Unfortunately I did not get a photo of all the prize winners but I did manage to get a photo of the fastest lady Delia Beddis of Les Filles RT. I asked her where she was from and she said that the club is based in South London but that she was from Yorkshire where proper cycling takes place! Jake said hello to her and remarked that her club colors would match her new Planet X bike.

On a personal note I had an ambition to take the £15 prize for fastest 70+ vet but was soundly beaten by John Froud of Festival RC well done john. I came second out of 4. However even more amazing was Robert Gilmour from Hounslow & Dst Whlrs vet 60-69 Cat who annihilated the competition including Patrick.

The ladies get a special mention and photo for the excellent cakes provided and donated by many. Sadly only two photo's below. 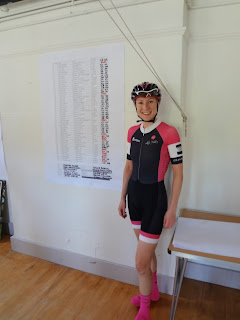 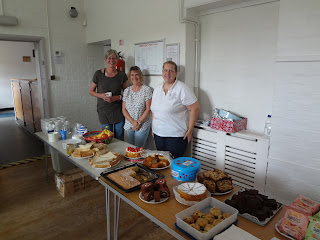 A massive well done to everyone from the club who helped in anyway. In particular, chapeau to Ian Davies who promoted the event on behalf of the club. There were 10 members on the start list but a particular mention should go to David Watt, with what I think is a real breakthrough performance for him over the 10 mile distance, smashing his PB to be the first Phoenix rider home in 22.49. On top of that we won the team event with Russell and Simon T rounding out the team. Well done gents.

We have received thanks from a couple of riders, will update this post with them shortly, but I have yet another interruption right now!

There were slightly more favourable conditions for this evening 10 compared to the last couple. Still windy but not as bad as previously in the day. It was good to see our big hitters out for this one, with Marcus just about making the start after a nightmare journey around the M25. Good for him that he did, as he romped to victory to take the Men's Club Championship Trophy, pushing David into second place, with a still highly respectable 23.43. It was good to see Stuart Pearce back in the fold, rounding out the top three.

Once again, Jake was the Women's Champion in 28.20, with Deborah Hurst taking the second spot in 31.45. We were denied seeing any more KPRC ladies taking to the start line through various reasons, but our particular thoughts go to Sam Pickup, who had an accident at the weekend and could not ride due to a broken arm. Get well soon Sam.

We had some new riders for this event. Congratulations to Dale who rode his first 10 with Fernando Guttierrez, although they had mixed fortunes. Dale was persuaded to join us by Simon T, both members of Epsom Triathlon club, and Dale rode a highly respectable 25.50, which I am sure he will be trimming down very soon. Unfortunately Fernando missed the finish, but having come along to the Open 10 yesterday, he now knows where the finish line is! Sharon Andrew, who is also preparing for an Ironman Triathlon in the summer, also joined us for her first 10 mile TT and won the award for 'most enthusiastic crossing of the line'. She will be riding with us again soon.

Thanks, as always, to the various helpers that make these events possible. Brian, for his excellent handicapping, Steve for putting out the signs and Judy for number spotting. I was able to give Frank a hand with the clocks and it made me appreciate how much work goes into getting all that correct. Cheers Frank.