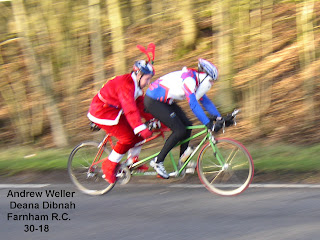 Competitors treat the Xmas 10 with varying degrees of seriousness!
Family Fricker are planning to ride the Farnborough and Camberley Xmas 10s on December 20th (10am start). They are encouraging any interested Phoenix members to ride and invite them home after for tea and cake.

Our newer members might be interested to note that any rides done in this event qualify in the 2010 season. 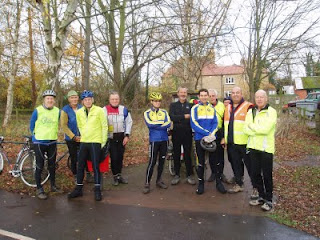 The motley crew all ready and fired up to go on Jake's Saturday morning training ride. A short ride from the usual start at Horton Country Park to eleven's at Shoots Garden Centre Stoke D'Abernon (3rd Sat. month).
Just as a reminder and all are welcome to join in from CTC groups and other clubs especially if they would like to join KPRC one of the fastest Ladies Team in the area indeed the UK!
Start is at 10am and there is an off road and on road ride.
As a reminder to me coffee stop is as follows starting with 1st Saturday of month through to 5th if there is one.
1st: Garsons Farm (West End/Esher)
2nd: Wisley (Ockham Bites)
3rd: Stoke D'Abernon. Garden Centre
4th: Polesdon Lacey NT
5th: West Horsley Garden Centre

If you haven't received a copy of the AGM notification in the post, or the email below which I sent to all/most members this morning, then please contact me ASAP.


O.K. Only about three weeks late, although I hope that most of you have already seen the attached notification on the blog: http://kingstonphoenix.blogspot.com/2009/11/2009-agm-notification.html - but I know that some people can't see the blog.

This has all got a bit messy as I have sent paper copies of the notification to those without email, as well as to one or two new members and Eric, who doesn't seem to be receiving emails from me! Plus I am missing real addresses for some people!!!!

So full notification attached (to the email, not this blog post!), but in brief here:

AGM 3rd December 2009 at the clubroom - Worcester Park Athletic Club, Green Lane, Worcester Park, Surrey - commencing at 8pm. We have booked the room down by the kitchen.
Plan is to follow the meeting with an American supper.

I have already received one motion, and a nomination for the vacant committee place.

The plan is to send out the "paperwork" early next week. If you have already received a paper copy of the notification you will automatically receive an envelope with the paperwork in (Post Office willing, of course).

Everyone else will receive the paperwork by email - which hopefully will include a list of all current email addresses in with the members/address list, and mobile numbers as well.

If you would ALSO like a paper copy sent, then please respond to the email asking for it and I will add you to the address labels.

A number of members have @ kprc.org.uk email addresses (there are some still available if you anyone else wants). Where I have any doubt about it pointing to the correct place I have copied this message to your REAL email address as well, so you should receive this message twice. Others I have work/home email addresses for and have used both.

Can everyone please reply indicating receipt of this message and indicating which is your preferred email address (home or work, or even both) and I will work with Frank to make that the basis of his email list for next season.


Finally as of 1st November the 2010 subscriptions are due, if you are coming to the AGM bring your £15 or your cheque book and Pete will send you home with your membership card. Otherwise see Pete or cheques payable to "Kingston Phoenix Road Club" and sent to him.

Come and celebrate with us and all of the 2009 Surrey League competition winners.

The evening will start with a short informal AGM where all members are welcome to give us their ideas for next season.

A free buffet will be available throughout the evening.
Please bring your own beer/wine


Surrey League
Posted by Lisa at 18:22 No comments:

Come and listen to one of cycling’s heros – Vin Denson.

Born in Chester, he chanced his arm and moved abroad back in the early 60s to start a sparkling professional career.

It was a huge gamble in those days, a big step into the unknown.

With just £200 in his pocket, the proceeds of selling off his furniture and other belongings, Vin and his suitcases arrived in Paris by train in April 1962. He was joining battle with just one complete bike and two spare pairs of wheel.

But he wasn’t alone as alongside him, and a partner in this overseas venture, was his wife Vi, as well as a little more…. Vi was already expecting their first child.

Vin might have been big in the UK but out there it was still all to do.

Living out of a room in Troyes, he was to kick off his career as a rider for one of the city’s two racing clubs.

But Vin was a strong rouleur and possessed a prowess that soon got him noticed.

He quickly climbed up the ladder and reached the top rung, receiving the call to join the top team of the day, Ford France, where the leader was Jacques Anquetil, the first man to win the Tour de France five times.

Jacques was very fair with his domestiques: quick to thank them for their hard work on the bike and quick to pay them their fair dues.

Vin’s record as the only British rider to win a stage of the Giro d’Italia stood for more than 20 years.

He also won the Tour of Luxembourg, following in the footsteps of Louison Bobet and Charly Gaul.

This extract from Vin’s book might whet your whistle….

His way to win a race was by being strong and riding so hard that “you wear the others down and then you beat them to the line”.

Vin adds: “There are other ways of doing it, of course. People talk about how this or that sprinter can finish like a rocket, shooting out of the bunch in the last 200 metres to snatch the victory.

“But I have never really respected sprinters. I admire the way they can kick out such terrific speed, but sprinters are often lazy, conceited, temperamental and introverted, whereas the real rouleurs, climbers and plain common grafters are generally more friendly, outgoing and relaxed.”

So if you want to hear someone who has all of those qualities – friendly, outgoing and relaxed – come and join us and hear more from the man himself.

Plan: Vin’s talk will run for around 60- 80 mins
After a break for a cup of tea there will be a further 30- 40min for questions
Book signing: Vin has published his story in a book entitled 'The Full Cycle'. Copies will be on sale.

Youngsters: 20 free places available to riders aged 5-16 who are members of a club affiliated to the Surrey Cycle Racing League

Where is Leigh? On the main A25 road between Dorking and Reigate… take the road south at the roundabout at the mid-point…. it is signposted for Betchworth.

Surrey League
Posted by Lisa at 18:14 No comments:

If you didn't know already, the Imperial Winter Series at Hillingdon is about to begin again. If you're interested , go to the Imperial Racing Team website for the latest information.

Hope to see you at the track.

Notice is hereby given that the 2009 Annual General Meeting of the Kingston Phoenix Road Club will be held on Thursday 3rd December 2009 at the Worcester Park Athletic Club, Green Lane, Worcester Park, Surrey; commencing at 8pm.

All motions for inclusion on the agenda, and any nominations for officers and committee members, must be lodged with the Honorary General Secretary at least 14 days prior to the AGM - no later than 19th November 2009. All motions shall be in writing and signed by both proposer and seconder. Any nominations shall also be signed by the nominee indicating their willingness to stand. Proposals/nominations by email will be accepted.
The meeting will be followed by an American Supper (everyone brings food along to share).

See Pete at the clubroom or pay at the AGM – don’t forget wallet or cheque book!
Senior, 1st Claim membership is £15: Cheques payable to Kingston Phoenix RC
Posted by Lisa at 11:23 No comments:

Next Committee Meeting to be Friday November 20th 2009 provisionally at Brian's in Ewell.

Can everyone make a 7pm start?
as I think we have a few extra things to discuss.
Let me know if you can't and we can either start without you or I can let everyone else know that it won't be 7pm!

Can all the officers either bring their AGM reports or - preferably - have emailed them to me by then...

We have a long list of club event results to skim through, which I will try to get written down before the meeting, to save time.
There is at least one proposition for the AGM in the works at the moment.
There will be the CTT National agenda to discuss.
There are at least two recent applicants and possibly another one or two who have not been rubber stamped yet - must check!
Club Dinner 2010.

And no doubt some other stuff too.
Posted by Lisa at 07:49 No comments:

Thanks, application form received - welcome to the Phoenix.