Membership update and where we all live

As at 31 December 2011 membership of the Kingston Phoenix Road Club stands at 59. To see where we are all based here are two maps I produced using a website called BatchGeo. The first map includes Lisa, Andy and Frank, whilst the second map shows those closest to the Worcester Park clubroom.

Den Rosendale is one of our life members and he is based in Ross-shire. 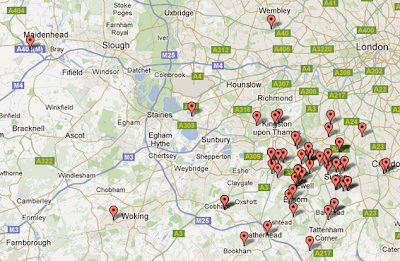 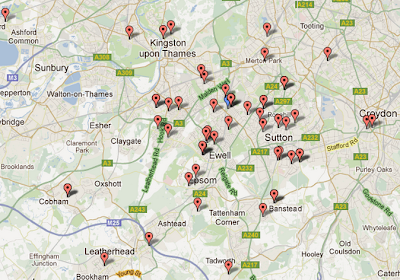 The clubroom is the blue marker.
Happy new year to you all.
Steve

It is traditional with The Phoenix to all meet up in Richmond Park Cafe (by the golf course) to wish each other a Happy New year and meet the CTC lot! Edd is leading a ride back to his house for the CTC for cakes and coffee! Look on the Forum to see if Dave B is willing to lead a ride to the Park, I always get lost! Also I always have a hangover! Maybe not this year.
Posted by Jake at 15:34 No comments:


Meet 10am Horton Carpark for on and off road rides
Posted by Jake at 11:15 No comments:

Happy Christmas from Walton on the Hill 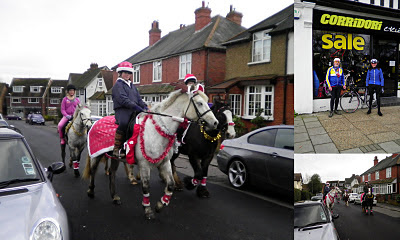 Daveb trying to get to the Corridori Sale on Christmas eve unfortunately they closed at 12noon and not midnight. I think he was expecting a "Mass" start! Hard luck Dave I was hoping to see your new TT bike! While riding back to Walton some of the local pony club were decked out in Christmas harness pity about all the cars. I tried to photo them as they rode across the common but they were too quick for me!
May I wish every one in our club and cyclists every where a wonderful time and a rewarding season in 2012 the year of the "Cav" and London Olympics.
Posted by mike morley at 09:57 No comments: 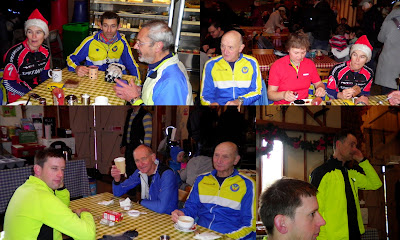 Thanks to Jake and Simon for starting the ride at Horton with Mulled wine! It really got us in the Christmas spirit. The plan was to go to Polesden Lacey which most of us did but apparently National Trust properties don't open on Christmas eve day! Did you know that? Nor did I! According to Barbara however a member it's a well known fact. The moral of the story-always tell your wife where you are going (what you must be barmy) it may well save you a wasted journey. The on road group arrived before the off-road MTB group and some told the MTB lot not to come and go to Bockets which is what we all eventually did but it was packed with people including a big MTB group from Redhill.
Only problem was Garry had gone to get some Olives en route and arrived at Polesden on his own to find no one there. (Moral of the story always listen out for mobile phone in case wife is trying to contact you to save a wasted journey). I was looking forward to Garry sharing his Olives with us but alas the mean b.g..r only bought one and it was made of brass and for his hydraulic MTB brake hose.
Daveb & I returned via Corrodori only to find that the shop had closed at 12noon so business must be good but another wasted journey! Henceforth the twenty forth will be known as the "Day of Least Expectations and Achievement" though thoroughly enjoyable in good company and some funny hats!
Will try and add another photo though having downloaded Picasa 3.9 its even a worse nightmare than 3.3 became.
Posted by mike morley at 22:55 No comments: 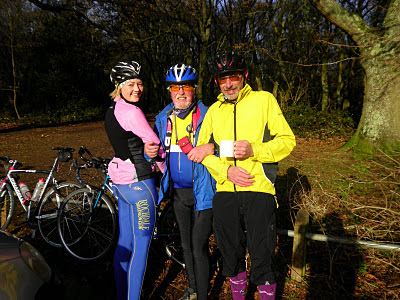 Yesterdays Audax had its compensations despite the ice frost and dodgy roads. The sun shone at the half way stage and Dave and I had some light relief with a charming fellow lass from
Rochdale. (Photo by Boyfriend). See Forum for more details. According to Johnb this event is to be repeated end January 2012 and I can thoroughly recommend the route it is mainly lanes and avoids main roads but does include ascending to Newlands Corner twice on the A25, takes a long hill out of Guildford towards Farnham and on the second leg goes up and over Pitch Hill from Shere to Ewehurst and down to Kingsfold for half a KM on the A29 and then returns via Rudgwick and Ellens Green and back up Pitch Hill.
Posted by mike morley at 12:00 No comments:

A few of the mb riders have booked in for Xmas lunch with The Festival RC at Holmbury St Mary. The start time for the ride is 9.45 Horton Park. You can join us for the ride if you wish and have a bar meal in a different room if you have not booked!
Andy Pearce
Posted by Jake at 18:05 No comments: 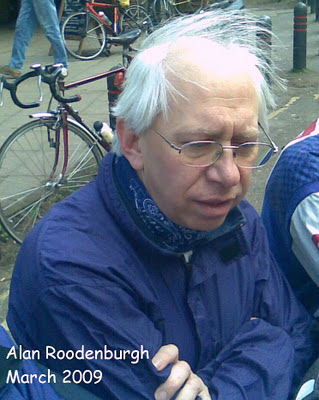 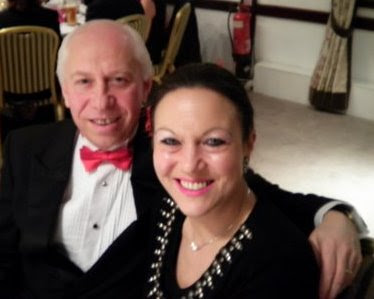 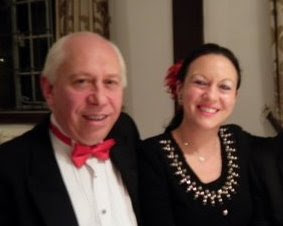 Apologies for the delay in posting any pictures of Alan, it's taken me an age to find something suitable of him - which I have finally found on Pete's computer. (Thanks to Steve, and I believe photographer MikeM, for the Club Dinner pics - but the original pictures were tiny by modern standards).
Posted by Lisa at 09:21 No comments: