Acknowledgments:
Many thanks to Brian Powney, Andy Avis, Ken Williams & Grant Pyke as our Phoenix Representatives/Volunteers

John Beer is one of out most experienced riders and is regularly seen competing in time trials around the area and still features highly in the evening 10 series. According to John, it's not all about the bike, but we all know that's a lie. ;-)
What’s your bike ownership history or what do you currently ride?
It's not about the bike. I've never had fancy kit and never will.

What made you join Kingston Phoenix?
Ken Day is a member and we go back a long way.


What has been your most memorable cycling experience?

What has been your worst cycling experience?
Losing the SECA bar when a couple of lads warming up decided to do dead turns right in front of me as I was racing down a big gift hill (but narrow) start for the required 10. I was a very sore and unhappy bunny.


What cycling / sporting achievement are you most proud of?
46.55 straight out tandem 25 club record (Wandsworth and District) on the A3 starting at the top of the Hogs back and finishing near Robin Hood Gate (before the M25).
What are your plans for the rest of this season or next season?
Hoping for a fastish 10 and 30 this year and riding LEJoG in 2015.

Sum yourself up in three words.
Must try harder.

I remember this event from last year for all the wrong reasons. This was because in 2013 on Evening 10 #6 I had comfortably beaten my 10 time and was in pretty good shape. For the next evening 10 I had been away, sitting in a tent in Cornwall, while everyone else had experienced a float night and gone even faster. As you can imagine I was hoping that last night would have been the same, but unfortunately it was not to be. Yes, it was lovely and warm with good visibility, but there was quite a blustery northerly that would sap the legs on the way home.

The really good thing about yesterday however, was the number of riders that we had, with over 30 riders on the start list and with 29 riders actually starting, including 8 non KPRC riders. Hopefully we can convince a few of them to get a Phoenix on their backs and start riding for us next season. Brothers, James and Stuart Clowser, were taking part in their first ever tt and performed very well with James  taking the family honours. James Hardwick had a very good first outing, finishing in 26:20 and Chris Dunstan rode a 15 second pb in harder conditions than his first outing a fortnight ago.

At the pointy end, Simon Trehearn was back at the top but David Watt was only 12 seconds behind despite having competed the Challenge Roth Iron distance triathlon at the weekend. Chapeau. Jake Dodd was the first KPRC lady home with Rachel Watkins in second place and Angie Launder in third.

Thanks to Andy Avis and Mike Morley for putting out and collecting in the signs, Ron and Doreen for also putting out signs and marshalling the turn and Frank for timekeeping.

So one more evening 10 left. Let's see if we can get another full field out for this one. Unfortunately, I will not be one of them so get your entries into Frank for next week. 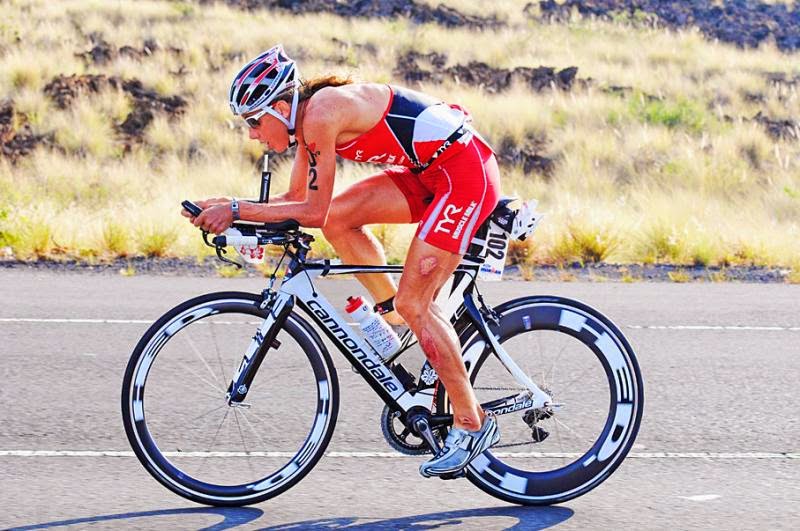 Chrissie Wellington, the multiple Ironman Triathlon Champion, had her Cannondale Slice tt bike stolen yesterday, in Chessington of all places. So if you see someone knocking around on the above bike or it is offered to you then let the police know. it's the same bike as pictured above but with HED training wheels. It has Di2 shifters, a small pink hibiscus flower logo and Ironman tri gold sticker.

It was a smaller field for this event, with 23 starters including 3 riders from other clubs. It seemed  a bit blowy but that didn't seem to slow down David Watt who recorded his first scratch win for an evening 10 with John Beer and Richard Addis taking second and third places.

Jake Dodd took another win with Angie Launder taking second place. Hopefully we will see more of the ladies returning for the next evening 10. Richard Addis took the handicap win with Ken Williams in second place.

A special mention to a guest rider Chris, who at 14 years of age completed his first tt in a very respectable 27:50. I am sure that if he keeps on tting he will take a lot of time off that in the near future.

Many thanks to Andy Avis for putting out and retrieving the warning signs and Mike Morley for putting out signs also. Ray Dare and Ron Powney for marshalling and Frank for multitasking by operating the clocks and pushing off.

Almost a washout for the BBQ, but the rain stopped at 4.30 on the dot and never came back! Brian organised the bbqs and getting started and everyone piled in to sort salad, put things on plates, dry chairs and put out cushions. People arrived and a good time was had by all.
Lovely to see Betty, and Frank Powney.

The third attempt for Worthing training ride was a success after a wet night. Dry ride on wet roads for first half. Nice to see Sean back after his wedding used up all suns this year. Lee, Simon W, Mike M, Brian P and guest stars Mike and Tom Fricker. Blasted down to the coast in two half hours. Met up with Mike Avis and his wife who rode 5 miles to cafe. Then Doreen, Ron, David and Judy turned up. We sat outside in the sun for breakfast. Simon and Sean met up with their ladies for the day and Lee shot home up A24; leaving me, Mike, Brian, Mike and Tom to ride over the hills to Steyning, then home through the lanes. Stopped at Tanhouse farm for refreshment and back home for 4pm, 91 miles.

Fantastic day, sun all the way home.
Posted by Unknown at 20:59 1 comment:


Acknowledgments:
Many Thanks to Ken Williams and Joe Bertorelli as the Phoenix helpers for this event


(Actually, I am guessing rider no 1 will actually go off at 19:40:30 -- due to the maths involved in working out the times, but once the first rider has gone off how many of us look at our watch rather than the number of the rider on the start line. - Lisa)
---
Posted by Lisa at 01:43 No comments:

2014 Kingston to Worthing has been cancelled due to roadworks

No club awards, just points for the club events trophies.

Event cancelled due to roadworks: http://www.beccyclingclub.co.uk/article-open_25_cancelled_due_to_road_works.html
Posted by Lisa at 16:52 No comments: