Follow this link for photographs of the event on Sunday.

This looked like it could have turned into another awful morning, like last year, when the rain became particularly sleety and the temperature was only just above zero. Thankfully, the rain held off and the temperature reached a balmy 6 degrees or so, which made the conditions considerably more benign than last year.
Six of us were entered for this first one, but unfortunately Rick Opie was a DNS. Dale was riding his first SPOCO event while David Watt was returning from the dead, after a quiet winter on the bike. Simon T had been putting in some big miles in recent months and was looking lean and hungry, while yours truly had spent the winter on a turdo, so I was looking forward to seeing if it hd actually done me any good.
The first hill seems to go on forever, before hitting the motorway bridge, but after that it is a cuple of miles of net downhill with some very fast and bumpy sections. Do you stay on your aerobars the whole way down or play it safe and go to the bullhorns for some of the turns? While I know this course pretty well by now, I still need to sit up at a few points to avoid crossing the white lines in the middle of the road.
So after a few minutes of that, it is then the second half of the circuit, which of course is the various climbs back up to Bletchingly. There are only three actual hills but they are quite sharp and sap the legs and bike of any forward momentum and make this a truly sporting course. But than, it is time to do it all a second time. Joy! By the end of the second lap it is just a question of trying to be as fast between the lumps as possible and to let the hills take care of themselves. Lots more spinning than on the first lap and a lot more snot, so I must have been working pretty hard.
Not surprisingly, Dale was the fastest KPRC man home with a very impressive 55:xx and yet he still looked as fresh as a daisy at the end. I was very pleased with a 1:00:xx, which was a 5 minute pb on this course for me and was also good enough to claim the handicap win, Apparently, training does work!  Simon T was only just over a minute behind with a short 1:02, while the evergreen Mike Morley rounded out the KPRC riders with 1:24:xx.
Thanks to Jake and Steve Hillier who rode out to support on the day. A quiet start to our Rawson Shield campaign and the closing date for the next one, the SCCU 25, is fast approaching, so please aim to get entered in this, if you can.

Well done Team KPRC. Sorry to hear Ric that you had a cold and DNS. A wise decission it was very cold at start until warmed up. When I signed on Bryn Tully congratulated KPRC for entering 6 riders with the jocular comment we may get 1st and 2nd team, to which I replied not with me in the team! 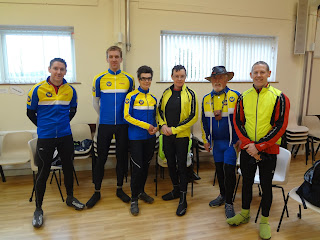 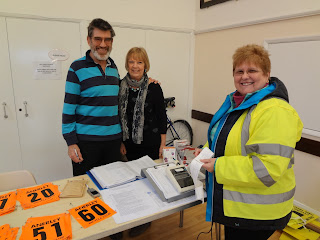 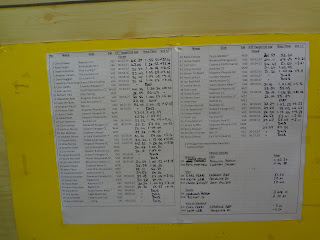 Congratulations to the organisers and as ever all the marshalls and helpers. Fantastic cakes and lovely tea!
Posted by mike morley at 16:41 No comments:

Well said Lisa, both events were published in the CTT Handbook for some time & both events cleared by the police. I do agree Alex that you are in no way at fault but given the intransigence of CTT, having allowed both events to be published may I suggest that we could have avoided cancellation of a medium gear event on the day by using a modified course somewhat like we have done before. We could have started at the first farm gate on A29 after Bear Green R/B, thus on the police approved course and then done a shortened event to finish either at the normal finish (railway bridge Bear Green) or go onto the normal 10 finish at North Holmwood. Handicapping could have been pro-rata according to the distance of the event covered somewhat less than 25 miles.

Especially as the weather was so good it's such a shame that our first event of the 80th year was cocked up in this way on top of the bad weather we had for our postponed reliability ride!

Lets hope for something better on Sunday 20th March for the SCCU Sporting 21 where KPRC have 6 riders entered in a brave effort to retain the Rawson Shield, including the oldest fart in the field, yours truly MMHM. May I suggest that Sundays ride should be a support team to cheer us on at Bletchingley. Tea and cakes in the village hall HQ. Rick Opie is first rider off at 9.14am. I wish you all well and trust that my improving left knee will hold out, it's a hilly course not to be attempted on 72" fixed.
Posted by mike morley at 12:39 3 comments:

Apologies, but I have decided to postpone tomorrow's MG 25, owing to the clash with the East Surrey event, which shares part of the course. One day, I will promote this event and it will run on the publicised date, at the publicised time, on the publicised course. At ease everyone. Alex
Posted by wheezy at 19:33 1 comment:

A change to the original sheet. First rider will be off 15 minutes earlier than scheduled at 07:46am.