Philip Burgin is a regular TT rider for the Phoenix who has competed regularly in the club 10 events and SCCU Rawson Shield counting events. Philip tells us about his long racing career with the Phoenix and Hillingdon clubs.


What’s your bike ownership history or what do you currently ride?
My first new racing frame was a Mercian Superlight track frame with mudguard clearance (at my Dad’s insistence), so I could also use it for clubruns. How I hated the mudguard clearance as a 14 year old! Many bikes later I currently own a Planet X TT bike, Colnago CLX road bike,  Ambrosio winter bike, Condor Baccari 853 training machine, fixed wheel machine, Decathlon mountain bike with mudguards and a Brompton. In addition to a 1980’s rusty Hirame (for riding to the station), and a SJSC, another winter bike not in use.


How did you start cycling?
My Dad was (and still is) involved in cycling.  I used to go out with him timing Sunday morning TTs from about the age of 5. I was always going to be a cyclist and rode my first 10 when I was 11 and started racing properly when I was 13. The winter before my first season I went out on club runs on fixed, and won the Club Runs Trophy. That was in the last year of the South Ruislip Cycling Club. We amalgamated with the Uxbridge Wheelers to form the Hillingdon the next year.


What made you join Kingston Phoenix?
Moving south of the river! I was going to stay in the Hillingdon, but one Saturday I was trying to get to the Club Dinner at Uxbridge Golf Club and encountered complete gridlock: Hammersmith Bridge was shut and I had to turn around and miss the Dinner. I needed to find a south London club! I’ve not regretted my choice.


What has been your most memorable cycling experience?
There have been a lot but winning the Club Championship and the Junior Championship in the same year just does it. I turned 18 in July and rode a 50, and as well as winning first handicap my time was faster than anybody else in the club. So my Dad said I had to ride a 100, as the Hillingdon club championship is 25, 50 and 100.  The pain in my back from sitting on the drops for over 4 hours for the first time is still memorable! But I hung on to do enough to clinch the club BAR.


What has been your worst cycling experience?
My one and only try at the National 25 Championship in 1979. The omens were good as I’d got a late start (I still do love a late start) and my Dad dropped me off on the course 10 miles from the HQ for me to have a warm up. So I had my racing kit and best wheels with new Clement no 3 tubs in the car. When I got to the HQ…….. no Dad, and I rode around the field looking for him in an increasingly panic stricken manner. A kind sole who had already ridden saw my plight and lent me his wheels and some spare kit he had, but of course the damage had been done and I was psychologically shot and I ended up riding around the course in a daze. My aim was to beat the hour and I did a short 1 01 and to cap it all there was my Dad standing by the side of the road brandishing my wheels and Clement no 3s! As if I was going to stop and change them!


What cycling / sporting achievement are you most proud of?
A Saturday evening club 25 when I was last man off (a late start again) and I caught all the other riders to finish first. The icing on the cake was that I beat the hour as well, on the old Amersham Road that used to go through the centre of Wendover.


What are your plans for the rest of this season or next season?
My plans for next season are to improve on the woeful times I have been doing over the last few years. I have yet to recover psychologically from the closure of the P613, it’s time I did!


Do you have any particular cycling or sporting heroes?
Eddy Merckx must be the best ever cyclist, but in the UK it’s Derek Cottington. He was famous for riding 40 miles each way to work. If you have the physique to be able to cope with those miles you’re going to be fast, and Derek duly did 50:47 in the Oldbury and District 25 on the K16 in 1971 to break Alf Enger’s 1969 comp record. But it was disallowed by the RTTC because he had top roadman Phil Bayton as his minute man. Derek caught him but Phil hung on for dear life to finish two seconds behind in 51 49. So the RTTC deemed that it was incorrect field placing!


Sum yourself up in three words.
Slow fat git.

Certificate of Honour to Frank Cubis

Not sure if this is the highest honour accorded by the RTT (RTTC) but it is certainly well deserved and in my opinion overdue. Frank was awarded this for his years of unstinting service to time trialing for his time keeping which he has been dedicated to for many years. The certificate was awarded on behalf of CTT by Keith Wilkinson as seen below.
Well done Frank you are an amazing man and so dedicated to our sport. We wish you all speed in recovering from your broken leg which you clearly are! It would be great if Brian can represent this certificate to you at our Annual Dinner in Feb 2016 so keep it clean and in a safe place. Maybe the club can have it framed for you! 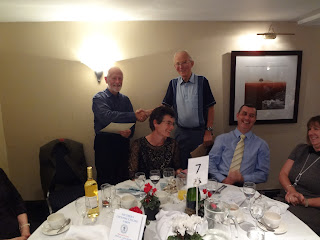 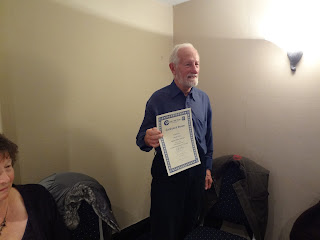 Copthorn Hotel LGW was the venue presided over by Rod Starmer President ably organised byTony Alston. As last year thanks to the encouragement of Brian P and the dedication of the KPRC riders we were awarded for the second year running the Rawson Shield. 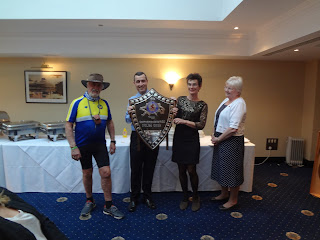 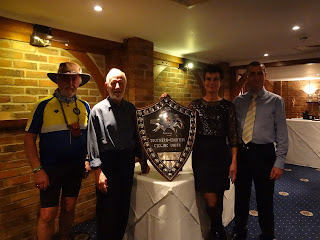 KPRC were on Table 7 and 10 attended as can be seen. Rod Starmer said hello to Jake and encouraged here to ride the SCCU 100 next year and although she was one a many KPRC helpers on that dreadful wet and cold day I hope that Jake will give it a go in 2016. Rod also asked where was Lisa and we explained she had a 99th Birthday party to attend. 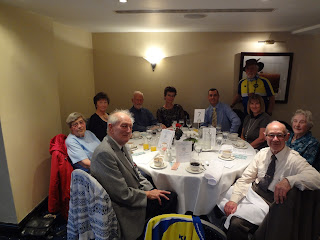 While KPRC were only presented with one trophy Dave Watt finished  7th in the mens BAR. Alex Kew finished  11th and  10th in the Vets standard table. Helen Bullimore won the Ladies BAR for the 5th time, an event that Jake has also won in the past. 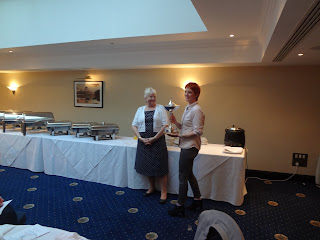