Now it is November the sunday rides will start 9.30 to avoid morning frosts. Please check forum as there might not be a ride every week. If you want to ride , post it on the forum and then people will know there will be someone to ride with!
Posted by Jake at 18:22 No comments:

Ron is now at St Helier in Sutton C6 blockC 6th floor cardiacare. Visiting 2.30 to 8pm. Getting nearer to home. We wish him well, he enjoys getting cards and news from friends.
Posted by Jake at 08:13 No comments: 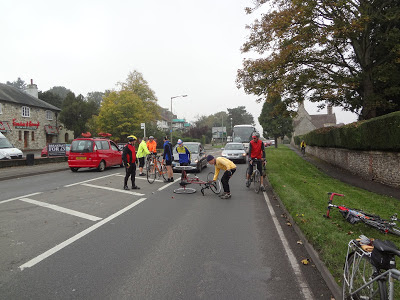 Franks Dream Machine on it's side on the A25 Dorking and Dave below unfortunate enough to run up the back very hard due in my humble opinion solely to the fact that the motorist shown on the hatching was clearly in the wrong trying to overtake a group of cyclists riding very correctly in single file. His explanation was that we forced him into the hatching! B...ock's as far as I am concerned the Highway code says you should not overtake moving vehicles at a keep left bollard or the hatching afterwards. His contention was that we all started to turn right and it is true, we were following the leader a few riders in front who was clearly indicating to turn right but the motorist in my opinion was simply desperate to overtake these "Plebs" on the road without looking ahead and clearly seeing we were all about to turn right. All the motorists behind are clearly staying out of the hatching and not intent on overtaking. I for one would not let the matter rest but then I guess that is me! 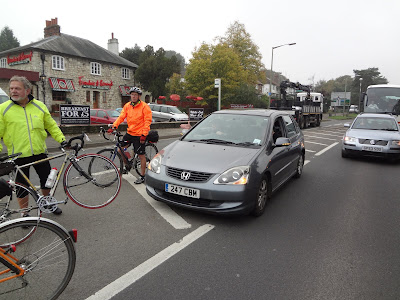 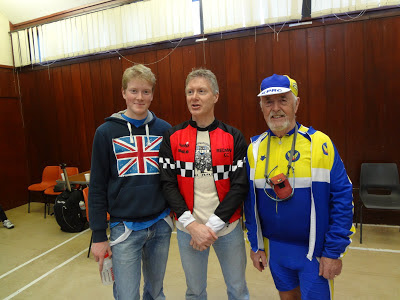 After a valiant effort by young Tim to drag old dad around the Redmon 2-up today we came 2nd in the Father  & Son category beaten by the promoting clubs duo of Eddie & John Allen. Mike is seen here congratulating them after Tim had gone home to bed to catch up on lost sleep. Can't wait for revenge next year! Hard luck Simon & commiserations to Alex who was ill on the day. Also hard luck on Ray who could well have picked up a prize on standard. Let's try and attack this event next year with our top class riders, it wasn't a full field.

As you have noticed we have swapped Stoke for Horsley as we enjoy the longer ride, and Ockham Bites is too cold so back to the Vineries, which is nice and warm!
If it is snowing or really really wet we usually go to shortest venue which is Stoke Dabbs! So if you plan to go straight there text someone to check!!
Posted by Jake at 18:28 No comments: 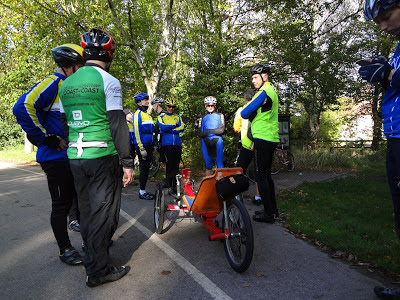 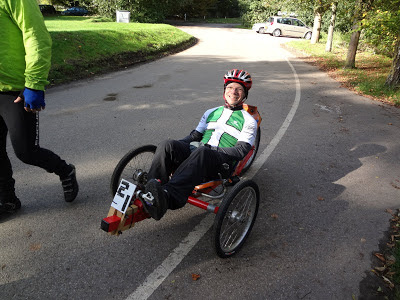 Not content with winning the Consolation 25 - well done! you now outshine us all with a new relaxing way of cycling. I particularly like the large block of wood that supported the number 21 perfecting what appeared to be a battering ram on the front of the main spine of the machine! Thanks for letting me have a try, it was great but the braking system took some getting used to! 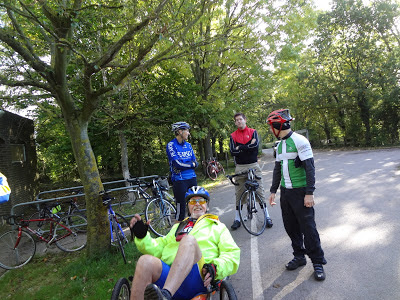 The Phoenix and Keith and Frickers halfway up hill. 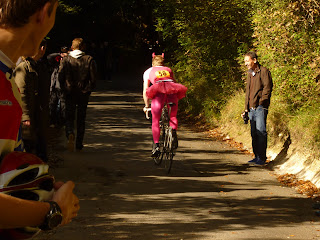 Some rode for a cancer charity! 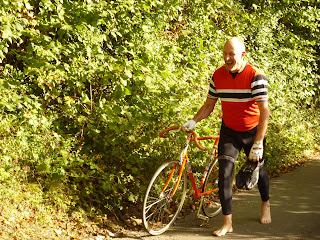 Garry Beckett climbed off round the corner, but later finished with help! 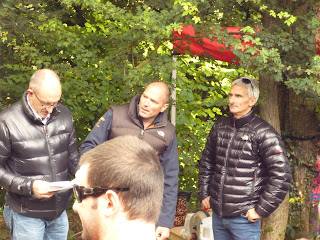 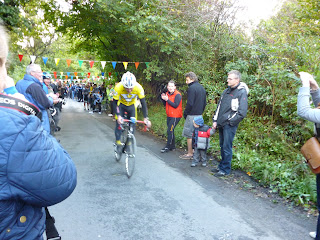 Ned Boulting and Florence.
Posted by Jake at 19:22 3 comments: 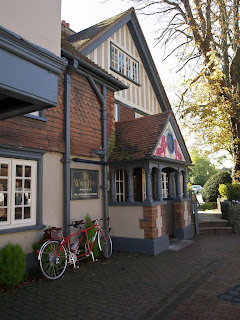 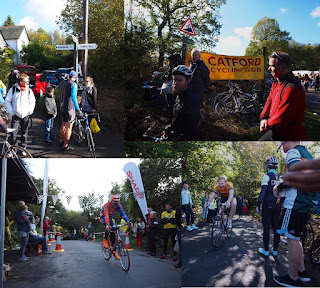 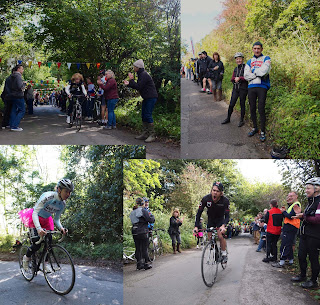 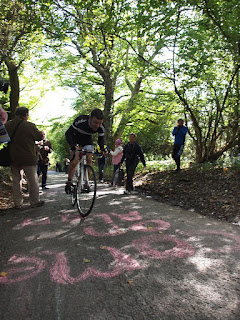 Maggie and I rode the Flying Gate over to see the Catford and Bec Hill Climbs today, and we had a very good Autumn day out.  We saw Andy, Frank, Grant and Jake at the Bec and Maggie thinks she saw Grant at the Catford, but can't be sure.

OK, I'm behind on a bunch of things - this is Doreen's update on Ron sent on Tuesday:

Has been eating much better since about last Sunday week.

Getting a bit more exercise, in the corridor and in his room (still isolated because of minimal diarrhoea 3 days ago - is a threat to other patients).

Might be home in about a week, they do need to do another "procedure" on him to get rid of the Atrial Flutter, if they can fit it in the next week they will otherwise he'll come home and he'll go back in a few weeks time to have it done as an outpatient.

So it looks as though 9th Oct is a distinct possibility.

At least he has TV in his current room and he was reprimanded for staying up late watching the Ryder Cup. 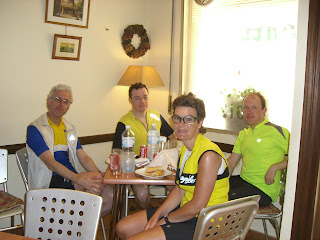 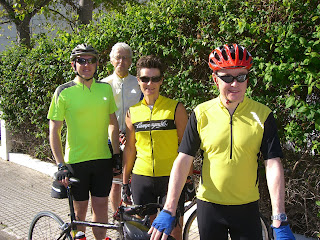 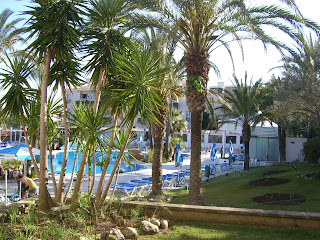 We have quite a number so far going: Me, Gary, Simon, Jen, AndyP, Matt, JohnB and the Twins, Mel and Andy, Jen's Mum: Bridie, Grant and brother and quite a few not confirmed.

Joanne Fricker is also going but asks is there another female going she can share with?

Anyone is welcome, its not a training camp! There are led rides, fast med and slow and your own group at your speed. The island is full of cyclists at this time of year and the roads are quiet and a good surface. Look at our reports and photos for last year in May 2012 blogs. We would really welcome some of our newer members to come as it is good value and all you have to do is book up flights after sending cheque to Gary Smith. I will send out the E mail again with booking form.

Congratulations to Stuart Pearce who came 6th and Simon Trahearn 13th in the SCCU BAR with an average of 24.230mph and 21.665mph respectively! Well done maybe with one more fast man we could get a team award next year though it seems we will have to be capable of 25mph +. KPRC did not figure in the VET's results, I guess that's because Ray did not do a 100TT but I bet his average plus would be quite high based on age standard old or new!

If anyone would like the full results I can forward them but my computer skills do not permit me to attach them here from my docs file. Lisa which link on the toolbar do I use?
Posted by mike morley at 21:43 No comments: