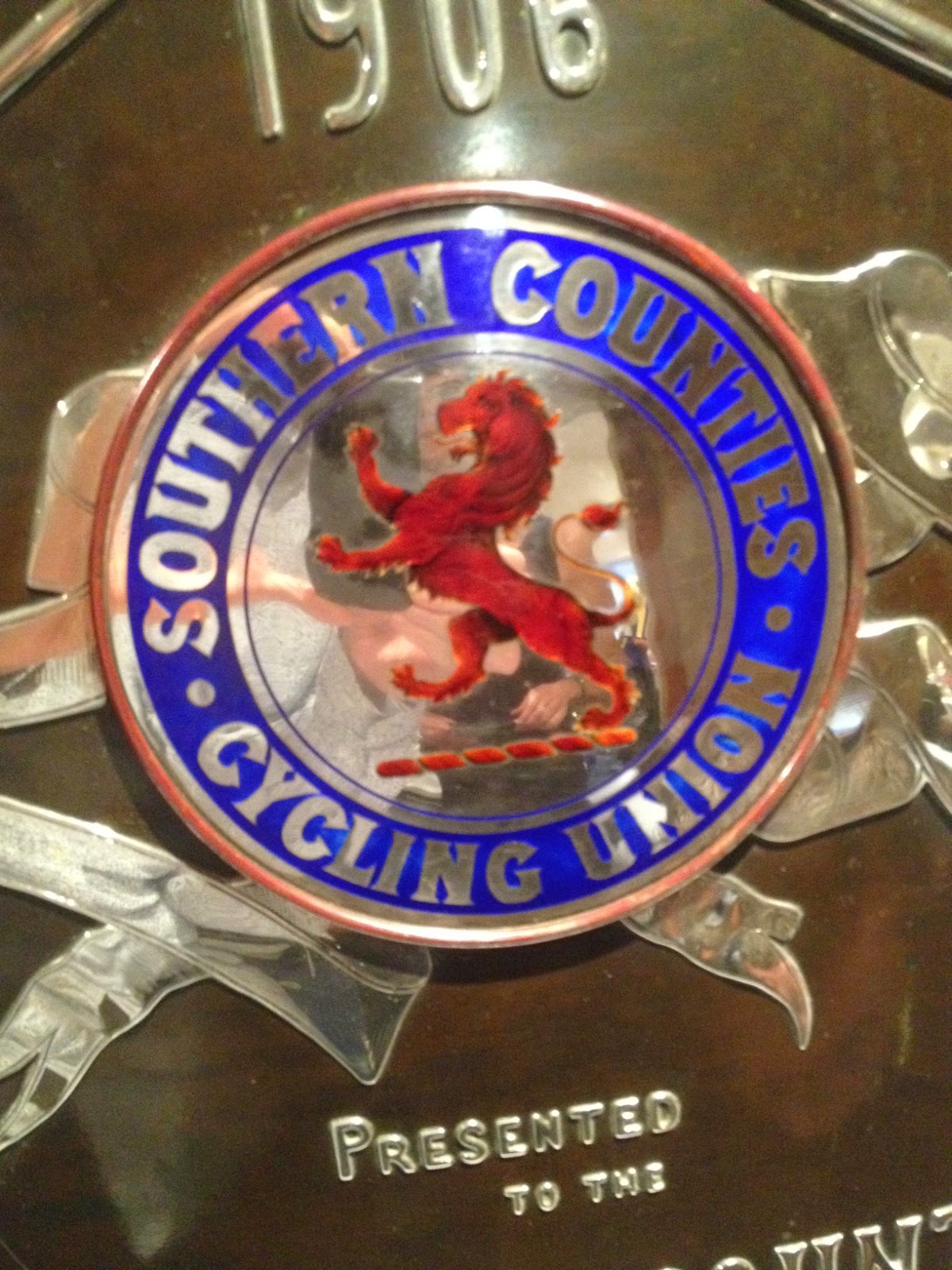 So after a full season of time trialling, the Kingston Phoenix Road Club won the SCCU Rawson Shield for the first time. It has been a truly magnificent effort by the racing members of the club, with 26 riders contributing to this win. Every entry gained one point towards the club's total and this shield is usually won with around 40 points, but we have absolutely smashed it this season with a total of 80 points; 41 points more than the second placed club, Addiscombe CC. Well done everybody.

Mike Morley, as the only KPRC member to ride every single event (that's a total of 326 racing miles by the way) he received the Shield with Brain Powney last Sunday at the SCCU  Prize Giving Lunch, held at the Copthorne Hotel.

However, this was a true team effort, so thank you to all the members who entered and raced in order for us to win this. I am hopeful of two things next year. Firstly, that a couple of other clubs might challenge us and that secondly, we win it again anyway.

Here's to next year.


Notice is hereby given that the 2014 Annual General Meeting of the Kingston Phoenix Road Club will be held on Wednesday December 3rd at the Worcester Park Athletic Club, Green Lane, Worcester Park, Surrey; commencing at 8pm sharp.

All motions for inclusion on the agenda and any early nominations for Officers or committee Members, must be lodged with the Honorary General Secretary at least 14 days prior to the AGM – no later than 19th November 2014. All motions shall be in writing and signed by both proposed and seconder. Any advance nominations shall also be signed by the nominee indicating their willingness to stand. Proposals & nominations by email will be accepted.

Club Subs for 2015 are due as of 1st November 2014 --- ie Now!
See Steve Hillier to pay at the AGM—don’t forget wallet or cheque book!
Senior, 1st claim membership is £15: Cheques payable to Kingston Phoenix RC

It seems that MHM was the only guy that entered all SCCU events according to a cross toasting by Tony Alston. It also seems from the prize presentation program that I also proped up from the bottom the BAR? Also got 4th in the age related standard time table beating Paul Tunnel of Addiscombe into 5th.
The photos below show the Rawson Trophy (in my dinning room - wait for the S H one T to hit the fan when my wife sees it!
I enjoyed the lunch it was very good and thanks to all the KPRC members that attended it was a very good turn out and forgive me for saying so Garry & Jake but you looked absolutely fabulous! 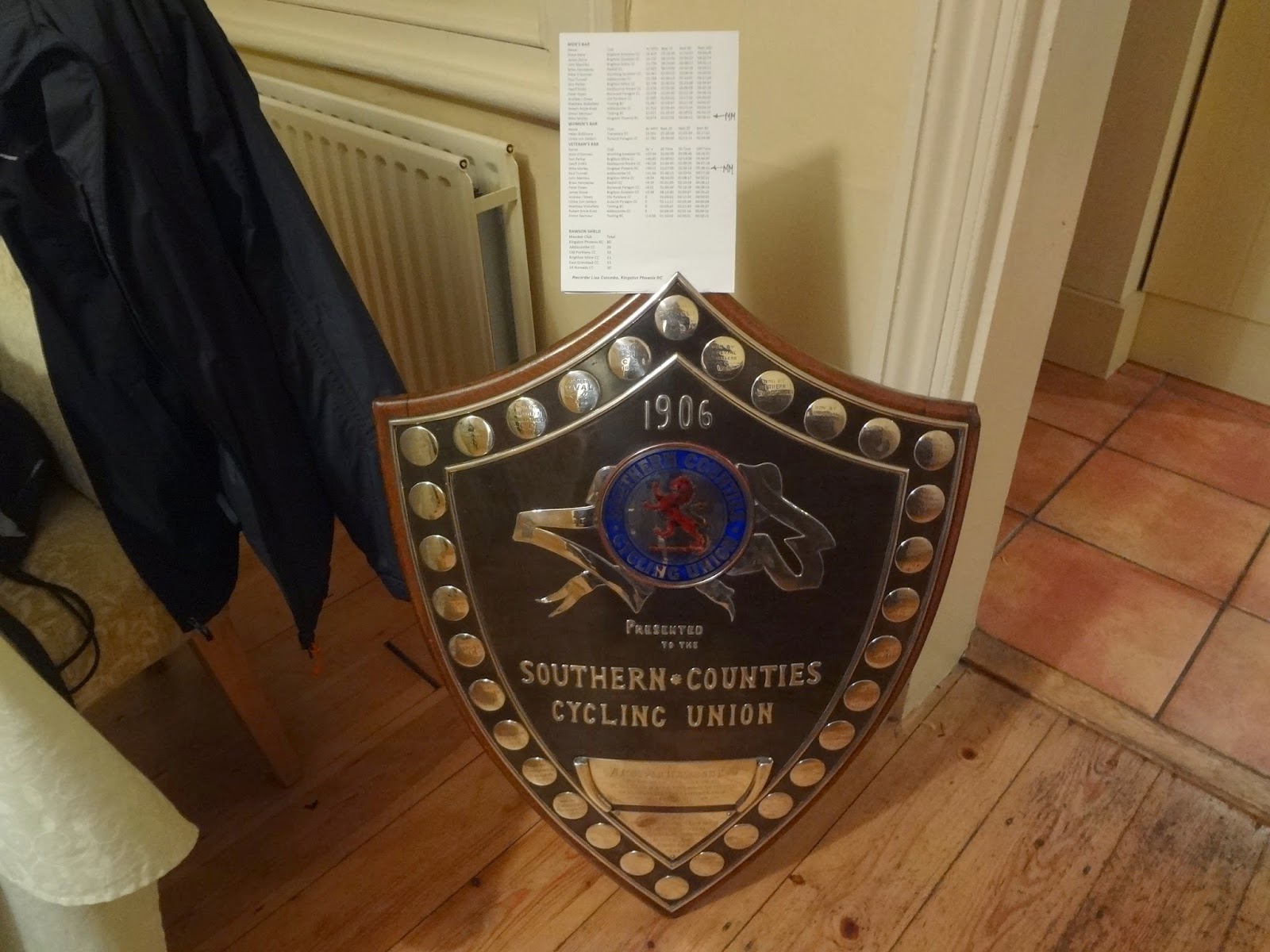 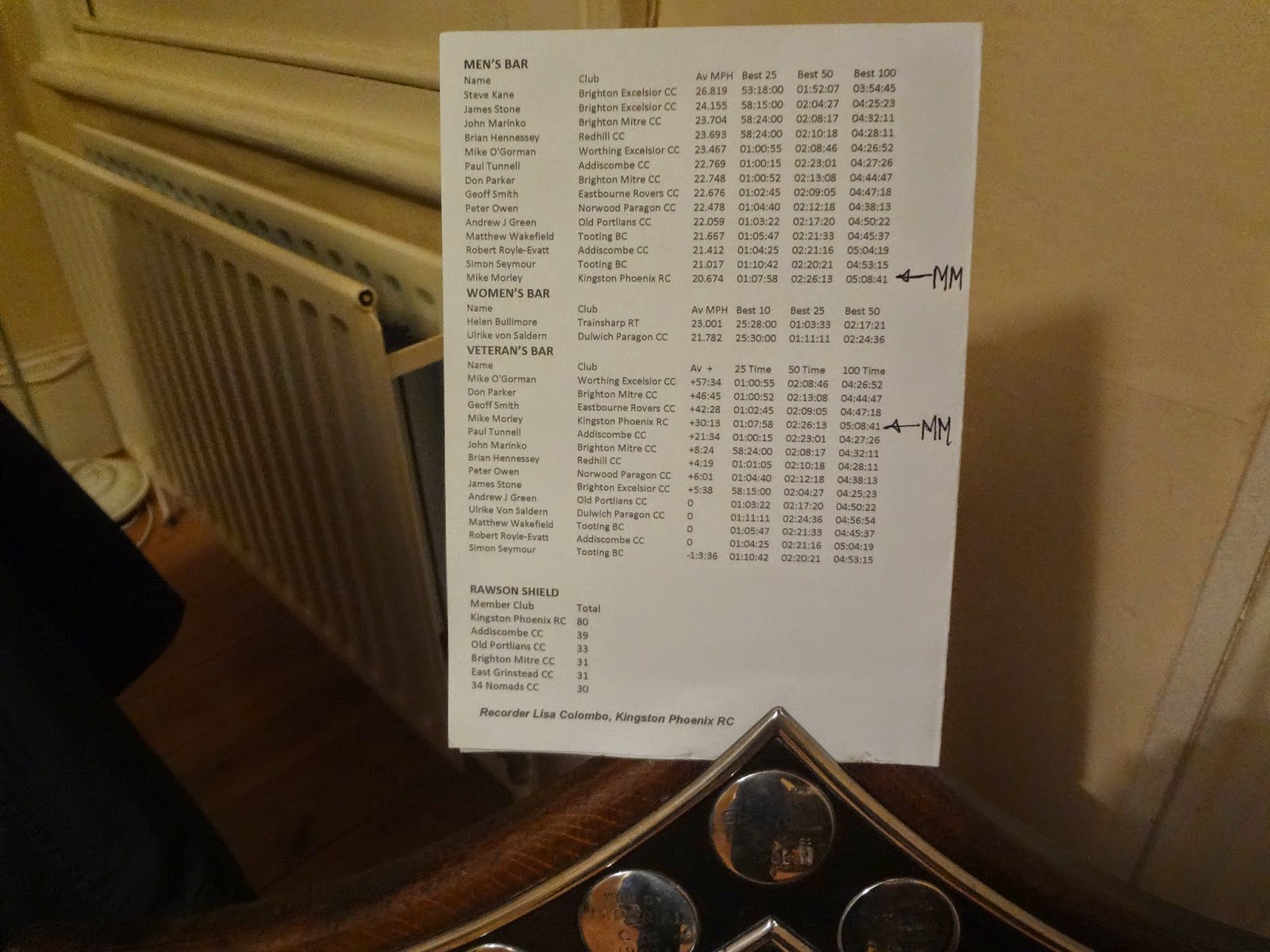 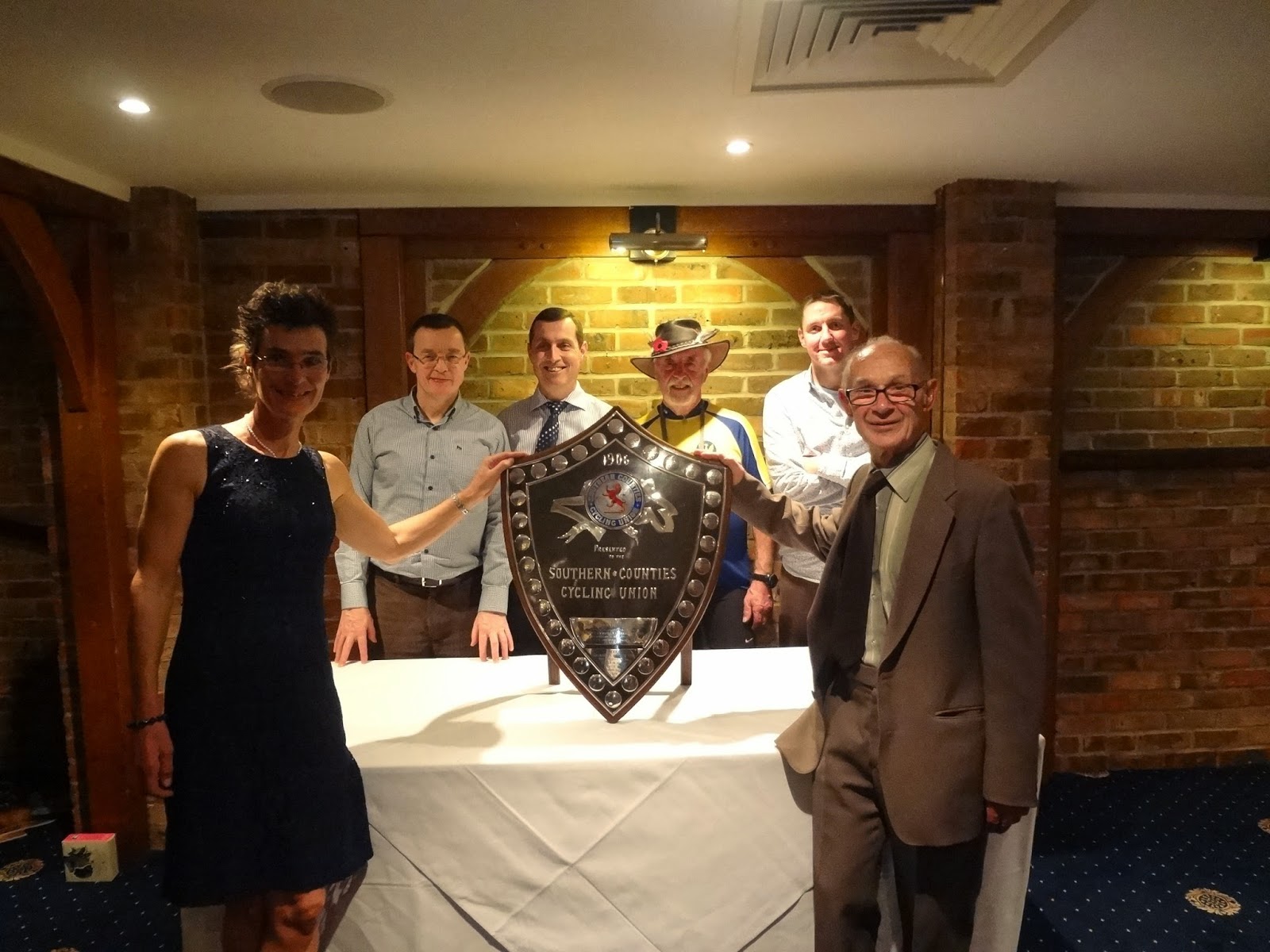 Thanks to the sterling efforts of Brain Powney we not only won but we annihilated the opposition pushing Addiscombe into second place 39 points to KPRC 80 in winning the Rawson Trophy. Well done Brian you motivated our club to do this! So next year let's not only go for the Rawson but one or two more SCCU trophy that no full team competed for. I attach some pictures the first of which is the array of splendid trophy's that the SCCU had to present. Sadly many of the winners were unable to attend!
Tony Alston did a fantastic job in organising the event and I felt that the food was really go. See my picture of the pudding course - 3 in 1. 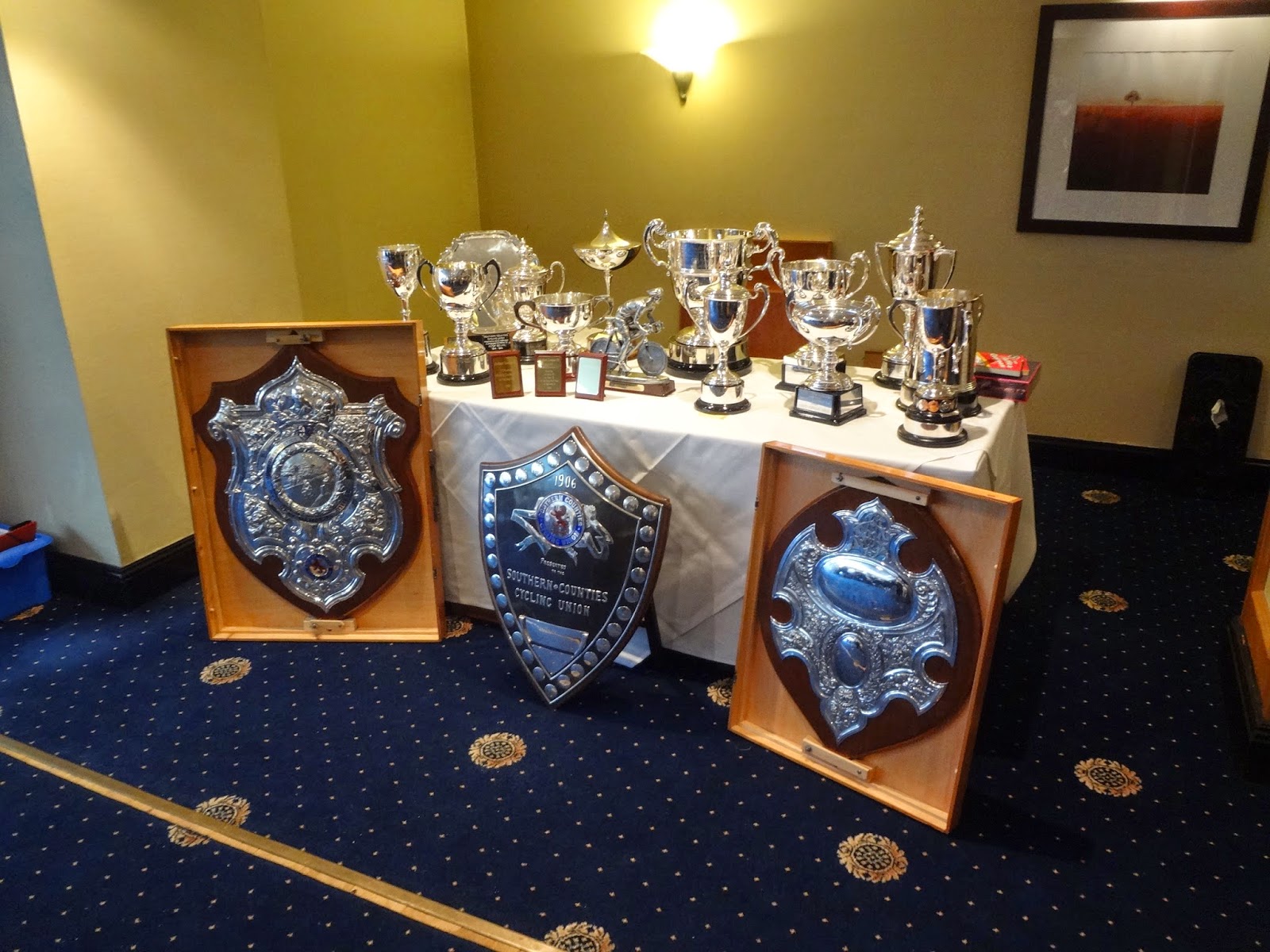 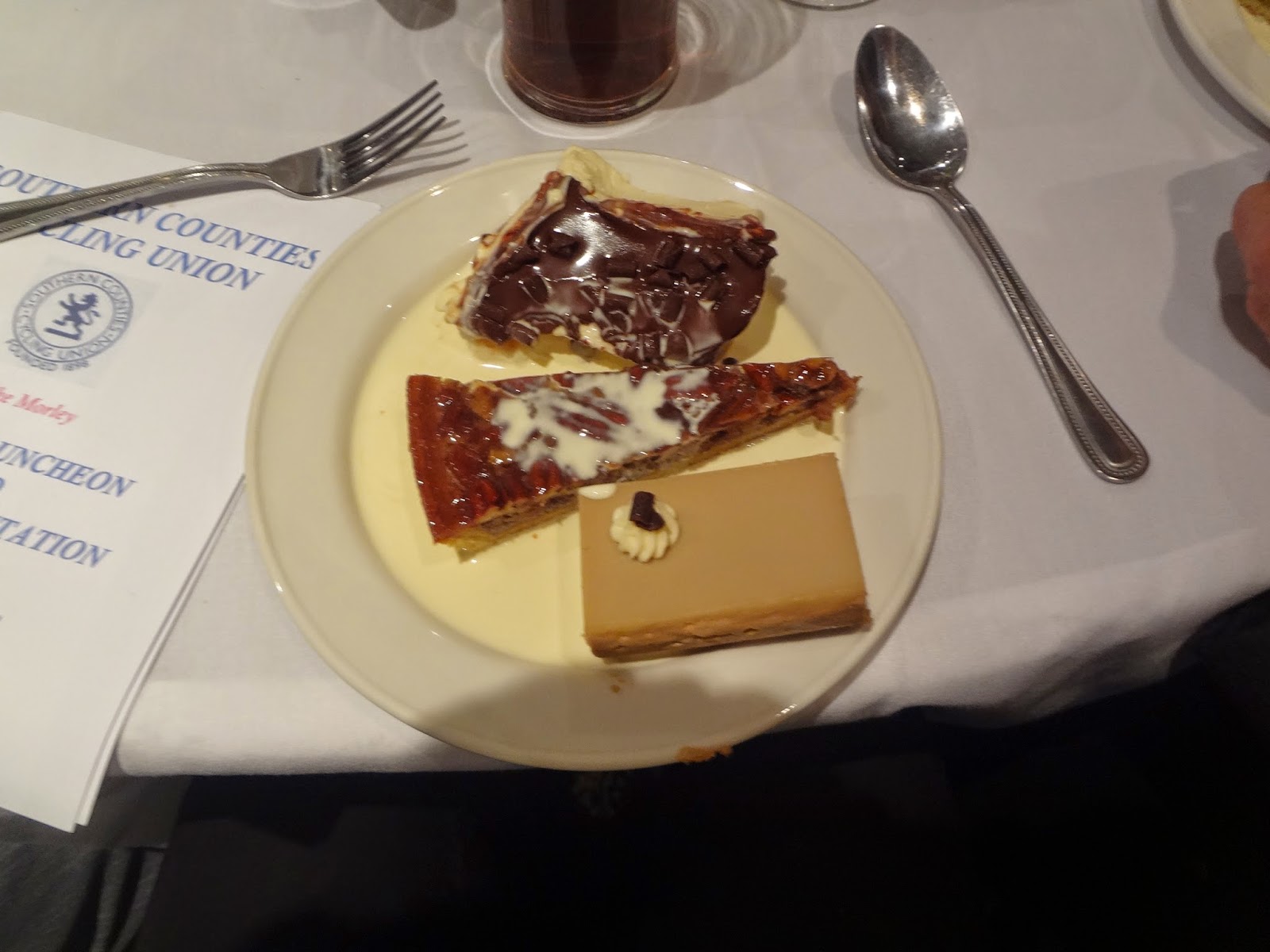 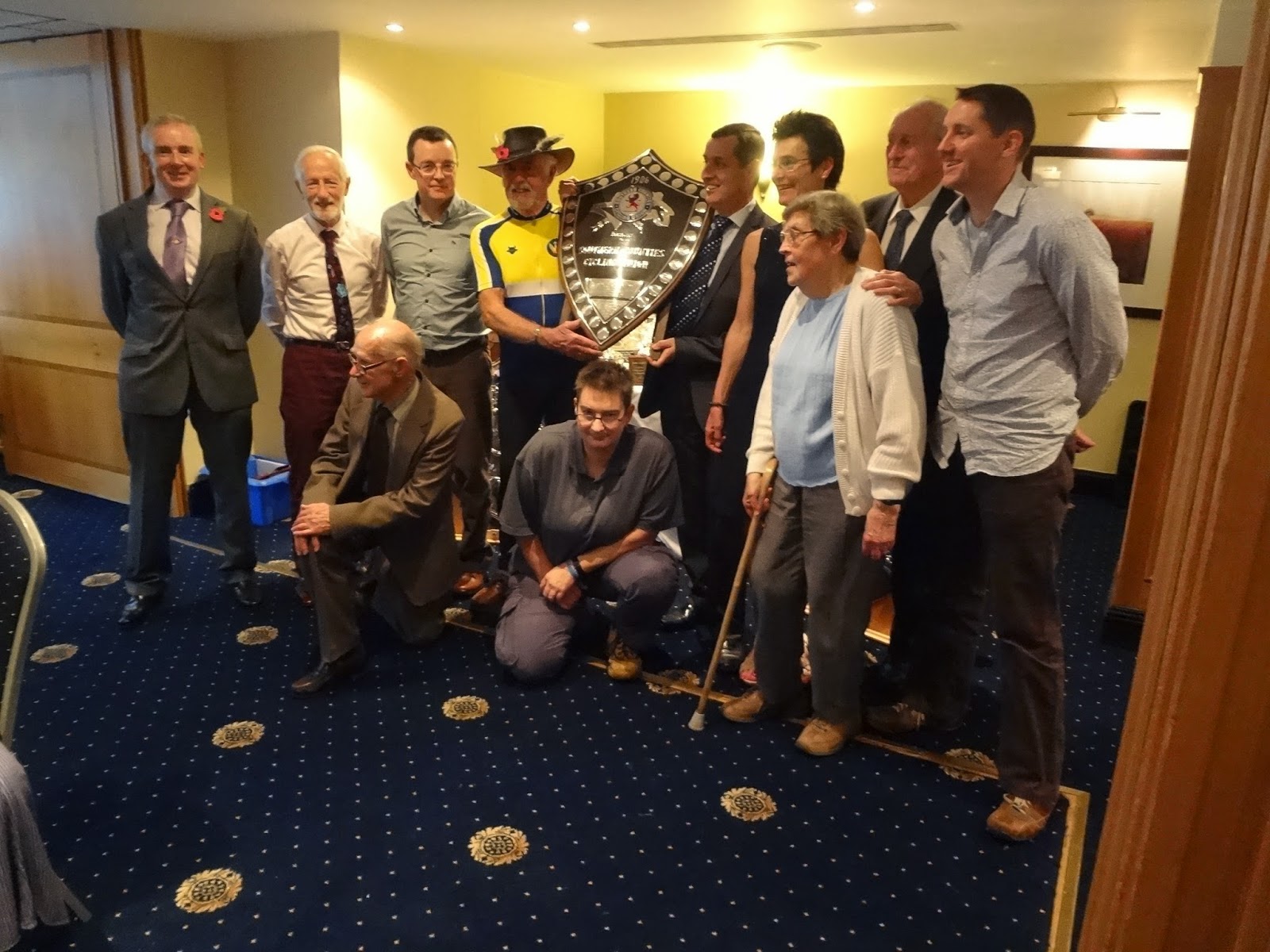 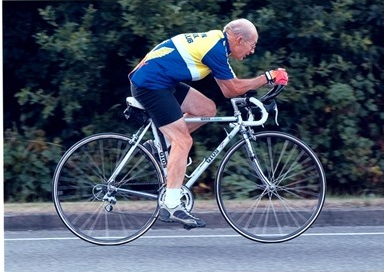 What’s your bike ownership history or what do you currently ride?
My very first bike was an 18 inch Goodley Chater when I was about 12 years old. I have had a number of bikes since and I currently own seven, of which I class four as tourist and three as racing bikes. My favourite racer is the Boardman Team  and the other two are a Gios and a Carlton. The Carlton has lasting memories for me as I mainly raced with sprints and tubulars and is still a delight for doing short local rides. It is necessary to carry spare ‘tubs’ which are quick to change in the event of a puncture.


In my Scottish tour this year I used my Evans Pinnacle in favour of my old 1981 Evans but it may well be my Enigma taking over for touring and the other bikes for general riding.

How did you start cycling?
My parents were keen cyclists and were CTC members before and during the 2nd World War and during the war I did one tour with my father. However during the war my first long ride was with my eldest brother doing 165 miles to Caerphilly via Gloucester as the Seven Bridge did not exist then. It took us 18 hours, leaving at 3am and arriving at my Aunt’s at 9pm. We returned a week later but in less time, as we were fortunate in having a tail wind. I particularly remember the outward journey starting in steady rain, being stopped by a policeman at Henley wanting to know where we were going early in the morning and my brother said Abingdon, where in fact we had a welcome stop for breakfast. I have always thought since that the ride to Wales and back has been the foundation of my urge to ride 100m  and 12hr TT’s, but not 24 hour time trials as 18 hours was enough for me.

What made you join Kingston Phoenix?
Through riding with the Cheam and Morden section of the CTC in 1948 and enthused by other C&M members I joined the Kingston Phoenix in 1951.

What has been your most memorable cycling experience?
For the most memorable ride, I would say that described above on my first ride to Caerphilly South Wales.

What has been your worst cycling experience?
The accident I had with a police car at the end of Ruxley Lane before there were traffic lights and when I lived at Worcester Park some 37 years ago. The police car did a right hand turn in front of me into Ruxley Lane when I was on the way to Ewell on a training ride. Fortunately, having been thrown over the side of the car and landing on the roof I escaped with abrasions of the chest and shoulders and apparently concussion. The latter I was to discover when a policeman bending over me at the bed I was in at Epsom Hospital who was asking me where I lived got three addresses before getting the right one! Fortunately I had two following motorists who were witnesses at the scene of the accident and I was told by a policeman visiting me at home that the culprit would lose his job if I made a case of it, so I accepted financial expenses only.

What cycling/sporting achievement are you most proud of?
This is a difficult one to answer being a member of the Phoenix for 60 odd years. However it was in 1951 that I rode my first 100 TT doing it in under 5 hours and I can now compare it with a 100 I rode at the age of 81, which was also slightly under 5 hours and therefore the distance I am most proud of.

What are your plans for the rest of this season or next season?
In terms of racing there are no plans as I am retired but I will continue with the enjoyment of riding a bike and the company of fellow cyclists.

Do you have any particular cycling or Sporting heroes?
Tony Doyle, Chris Braser, Chris Hoy, Bradley Wiggins and Chris Froome.

Sum yourself in three words.
A consistent trier.