Just to remind everyone the Local Hilly 50k ride is coming up sat 9th March. Starting at Rykers cafe, Burford Bridge at 10am. Entry fee £2 if pre entering on www.cyclingswlondon.org.uk or £3 on the day. Best to get there early as usually a queue to sign on. You dont have to be a member of the CTC or any club. You get a route sheet with basic map and written directions. I find it best to get in a group who have done it before. The finish is top of Box hill Nat Trust cafe. This will make a nice change from the usual sat ride.
Posted by Jake at 17:23 No comments: 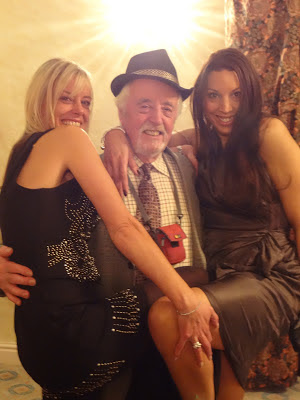 It's not every day your eldest daughter is 40 so to celebrate Mad Hatter (where did he get that hat - its back again!) went to town at Copthorn Effingham Park. OK she is not a KPRC member but Tim was also there to help things along. I hope my club mates don't mind me sharing the limelight! 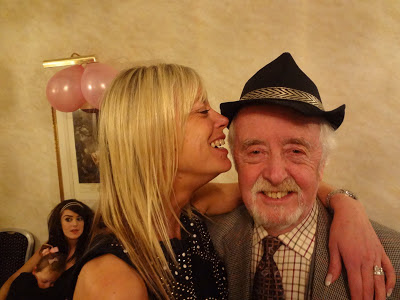 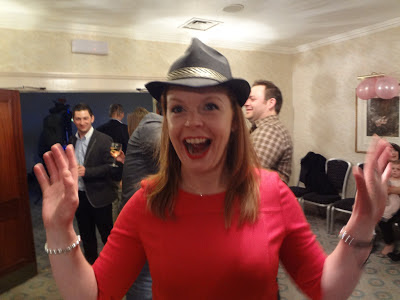 Second daughter Natalie - No not that hat again! 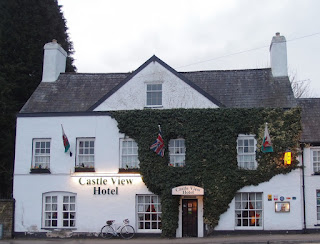 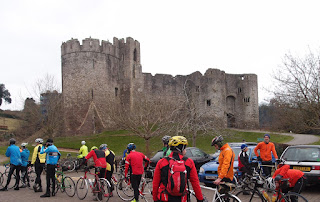 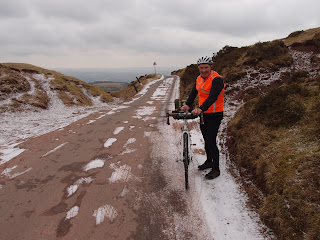 Yesterday, I rode 'The Gospel Pass', which is a long-standing and classic Audax ride.  It's always held at this time of the year, and, at 150kms, is fairly long for an early season event.  If you add in the Gospel Pass itself, the highest road pass in Wales, you have the makings of a proper adventure.

The ride starts at Chepstow, so I took my lodgings at the Castle View, where they made me a good breakfast before I walked across the road to sign in at the castle itself.  There was a large field of more than 100 riders, many more than is normal in our part of the world. But everything was well organised and by 0800 we were climbing up to a hilly spit of land that has great views over the Severn and Wye, heading for the first control at Monmouth.

The weather was very cold - it probably didn't get much above freezing all day, and was well below it most of the time - but it was a dry cold, so really quite bearable if you wrapped up.  The weather had given me some puzzlement with the choice of bike, too.  My Pearson Carbon Audax is excellent for this type of ride, as you would expect, but it's light, and a little flighty, so it might be a bit of a handful if conditions turned bad.  On the other hand my Croix de Fer is robust and capable and is fitted with snow tyres.  In the end the Croix de Fer got it, and I regretted my choice all of the fifty hilly miles to Hay on Wye.  Although there was ice in the ditches, and icicles in the hedgerows in places, the road surface was clear and dry and a lighter bike would have rolled easier.

Leaving the Hay control and beginning to climb the pass itself I began to change my opinion.  The more I climbed, the more the road gathered strips of snow and bands of ice.  Nothing to really bother about, but I was beginning to be able to ride where others chose to walk.  Hmm.

Just before the summit the organiser, Nic Peregrin, appeared, warning that there was a large amount of ice on the far side and that riders should walk down.  'Don't worry about the time', he said 'just get down safely'.  It's not often that your hear Audax timekeepers telling you not to worry about the time...

Over the top and down the other side, keeping a weather eye out for the ice.  Nothing much for the first couple of miles, no worse than the ascent, but as the road left the open moorland it went into a deep cutting.  Almost immediately it was covered with ice, for a distance of a couple of hundred yards.  It seemed that the trees on the top of the bank provided enough shelter to let the ice form.

I stopped and took a look at it, and decided that, with a bit of care, I should be able to ride it with the snow tyres.  Being careful to do nothing sudden I got across it with little difficulty, to the tarmac beyond.  Round the corner, and here was another stretch of ice, and so on for the next five miles or so, until lower altitudes turned the ice first to slush, and then to water.

Having learned the trick of passing the first patch of ice, this suited me quite well, and I was able to progress steadily, not at great pace, but very much more quickly than my fellow riders who were walking across the ice in cleats.  You could almost feel them willing me to fall off ...

On to the control at Abergavenny, which should have been in a pub, the 'Farmers Arms', but had been moved at short notice to a nearby cafe, as the rugby was on the telly and the pub was packed with people watching Wales win.  The cafe owner could hardly believe her luck -  a hundred hungry cyclists, when everyone else was watching the rugby.  Well.

Twenty-odd miles to go now, with another big hill in the way, but again I was rewarded with expansive views, this time over the Severn Estuary.  From the top, a fast blast down to the final control at the 'Three Tuns', Chepstow; in time, and ready for supper. 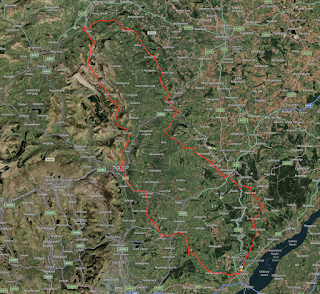 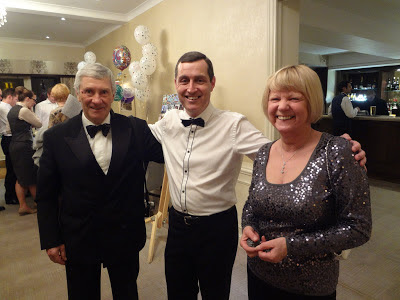 Good set of photo's on Flicker from Mark. As well said by Jake well done Brian for a fantastic event and a night to remember for your 50th! 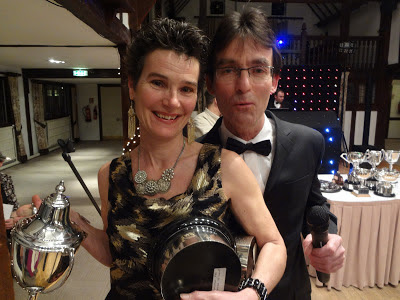 Well done Jake as ever the "Top" Lady. Thanks also to Andy for all the "Bonding" Special thanks from me to all the committee & those that voted for me to get the wooden spoon! Along with the adversity trophy it ranks as my highest honour! Once I get my hands on it I can start "Stirring" more! 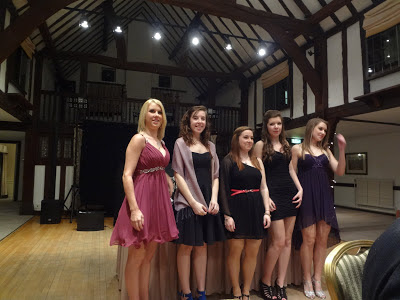 A bevy of Beauties! 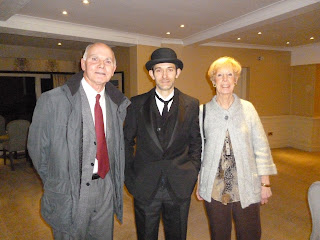 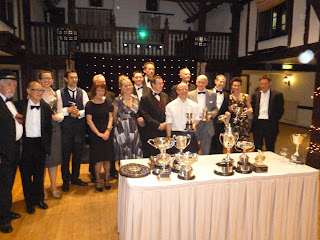 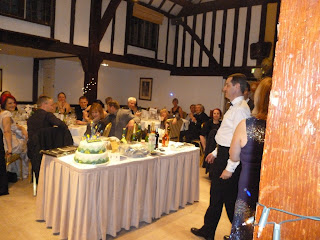 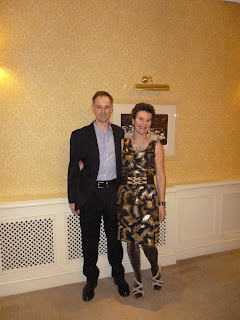 I have spoken to a few people and we all agree this years Dinner was the best ever held at Burford Bridge! The Food and Disco were perfect. The extra entertainment went down a storm and all the speeches were well thought out. Raffle didnt interfere with the disco. Loads of places to chat away from the main room. Brian should be proud after all the time and effort he put in to make it a brilliant evening! Thank you Brian.
Posted by Jake at 18:08 No comments:

Here are a few pictures taken at last night's dinner. Many thanks to the organisers and staff for arranging another excellent event. 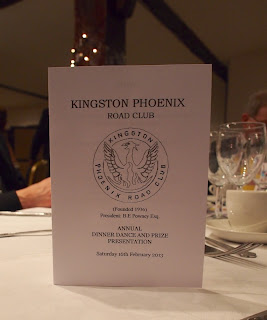 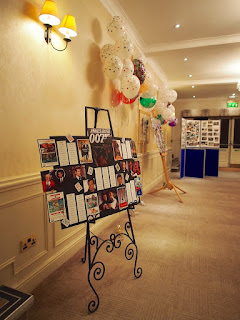 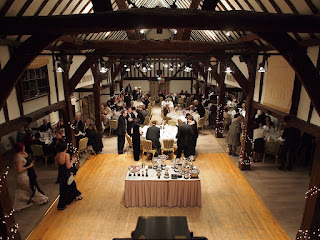 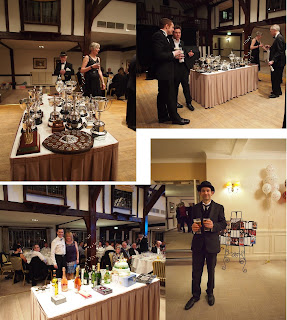 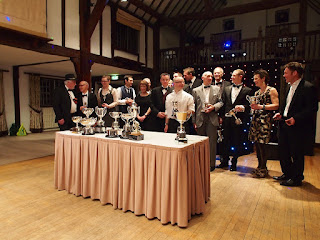 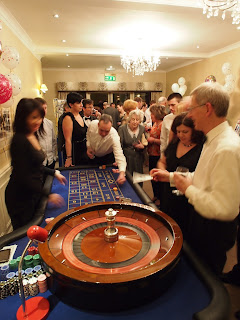